A Method for Surveying the Long-RNA Landscape of Exosomes

The emergence of next-generation sequencing platforms has enabled the discovery and interrogation of RNA from tissues, biofluids, and extracellular vesicles at remarkable levels. Recently, interest has grown in sequencing RNA found in extracellular vesicles called exosomes, because of their role in cell-cell communication and immunoregulatory processes. The contents of exosomes have been shown to consist of multiple RNA types including, micro RNA (miRNA) and messenger RNA (mRNA), as well as other biologically active molecules. Extensive work has focused on assessing the miRNA content of exosomes and it’s role as a putative disease biomarker. However, other types of RNA, such as long-RNA (> 200 bp; long non-coding RNA [lncRNA], mRNA, and circular RNA [circRNA]), may play an equal or more important role in cellular communication and cause alterations to biological pathways that affect disease development. Long-RNAs are a minor proportion of the RNA material in exosomes and until recently, it was extremely challenging to generate sequencing libraries from the very small amounts of long-RNA extracted from exosomes. However, new methods have emerged, such as NuGEN’s Ovation® Single Cell RNA-Seq System, which enable a single library to be generated from extremely small amounts of long-RNA. Unlike poly(A) library methods, these libraries retain the full complement of long-RNA species (e.g. lncRNA, mRNA, and circRNA).

In order to test the Ovation Single Cell RNA-seq System as an applicable method for generating next-generation sequencing libraries, consisting of multiple long-RNA species, and explore the population of long-RNA molecules in exosome samples, researchers from Cofactor Genomics applied the Ovation Single Cell RNA-Seq System to total RNA extracted from exosomes. The libraries were sequenced and the resulting data was analyzed to characterize the landscape of exosome derived long-RNA species. Here, they present the method workflow, number and types of observed long-RNA’s, relative proportions of long-RNA’s across multiple control and renal cancer exosome samples and propose functional categories for genes enriched in exosome samples. (read more…)

Average Number of Each RNA Type.The average numbers of each RNA type, from normal and renal cancer samples, are shown in the table above. The average was calculated from the summed number of signals in replicate libraries. A lower RPKM threshold cutoff was employed to count only high confidence signals (mRNA = 100, lncRNA = 500, circRNA = 5). 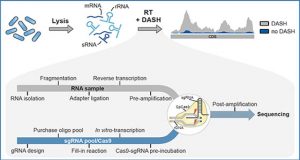 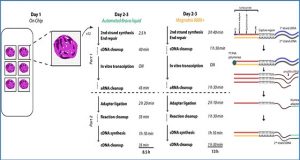 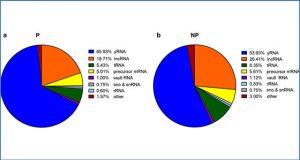