This study on retrospective RNA genetic testing for hereditary cancer risk reveals that adding RNA testing could provide more accurate results for one out of every 43 patients undergoing DNA testing and could improve medical care. Now, through +RNAinsight™, Ambry is the first and only lab to offer a commercially available clinical test to conduct RNA and DNA genetic testing for hereditary cancer risk at the same time.

DNA testing is a powerful tool used to tailor medical care based on an individual’s cancer risk. However, standard DNA testing can produce inconclusive results, find a change in our DNA to be a variant of unknown significance (VUS), and fail to determine whether it increases cancer risk. When this happens, healthcare providers might not have the information needed to recommend appropriate preventive and early detection steps, or certain therapeutic treatments, and relatives may not be referred for genetic testing for their own care. Adding RNA to DNA testing can overcome this limitation, providing more evidence that can determine whether a variant increases cancer risk.

For a substantial percentage of the VUS tested, the study found that adding RNA to DNA testing determined whether they actually increased cancer risk. Specifically, RNA genetic testing clarified 88 percent of 56 selected VUS, determining that 47 percent were actually diseasecausing and 41 percent were benign. In addition, all of the patients whom Ambry previously tested and who had these same VUS, received updated reports. As a result, an additional 88 patients had their inconclusive results clarified as positive (i.e., increased risk for cancer) and 322 had their inconclusive results clarified as negative.

“Adding RNA genetic testing to standard DNA testing for hereditary cancer risk needs to be the standard of care,” said Rachid Karam, MD, PhD, Director of the Translational Genomics Lab at Ambry Genetics. “Our data shows +RNAinsight will let thousands of more patients know if they have genetic variations that increase their risks for cancer and take action.”

The study also found that determining whether a VUS in fact increases a patient’s cancer risk can substantially impact that patient’s care. Of the clinicians who received clarified results and responded to a study survey, 44 percent changed their care for patients and 78 percent changed their care for patient relatives. For example, for those patients whose results for the BRCA1 gene were changed from VUS to disease-causing, new recommendations included risk-reducing surgeries and increased cancer surveillance.

When assessing the types of variants identified in a cohort of 307,812 patients who had undergone standard DNA testing at Ambry Genetics for hereditary cancer risk, the study determined that 7,265 – or one in 43 patients – could benefit from the addition of RNA genetic testing. Given that 700,000 people in the United States are expected to receive genetic testing for hereditary cancer risk in 2019, more than 16,000 individual results could change and be clarified with RNA genetic testing annually.

Variant Classification Before and After RNA Genetic Testing (RGT) 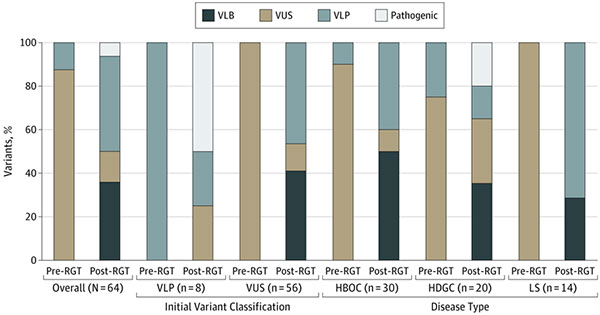 The study further showed that only 10 percent of patients invited to receive RNA genetic testing after having undergone DNA testing actually sent in samples. Given the substantial loss-tofollow-up from retrospective RNA testing and the proportion of patients estimated to benefit, Ambry has decided to make RNA genetic testing available to all patients at the same time as DNA testing through +RNAinsight, which is now available through doctors and genetic counselors around the country.