Advancements in RNASeqGUI towards a Reproducible Analysis of RNA-Seq Experiments

Researchers from the Institute for Applied Mathematics, CNR, Italy present the advancements and novelties recently introduced in RNASeqGUI, a graphical user interface that helps biologists to handle and analyse large data collected in RNA-Seq experiments. This work focuses on the concept of reproducible research and shows how it has been incorporated in RNASeqGUI to provide reproducible (computational) results.

The novel version of RNASeqGUI combines graphical interfaces with tools for reproducible research, such as literate statistical programming, human readable report, parallel executions, caching, and interactive and web-explorable tables of results. These features allow the user to analyse big datasets in a fast, efficient, and reproducible way. Moreover, this paper represents a proof of concept, showing a simple way to develop computational tools for Life Science in the spirit of reproducible research. 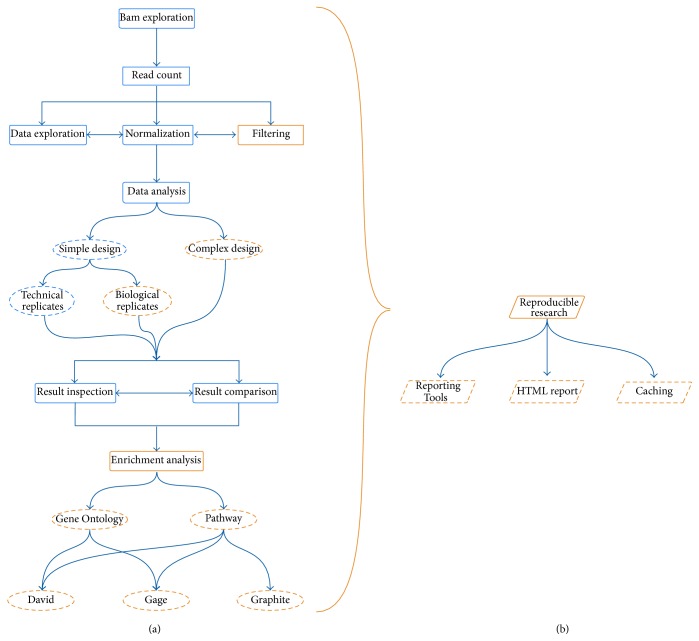 Old features are represented in blue and the novel features are represented in orange. The boxes represent the software modules, while the ellipsis represents the modules functionalities. Panel (a) illustrates all the features the user can interact with, while panel (b) shows the reproducible research modules that work without user interaction. Note that panel (a) also illustrates a typical workflow to be executed during the analysis of RNA-Seq data experiments.

Availability – RNASeqGUI is an open source graphical user interface, implemented in R, devoted to the analysis of RNA-Seq experiments. It requires the RGTK2 graphical library to run and is freely available at http://bioinfo.na.iac.cnr.it/RNASeqGUI. Overall, RNASeqGUI integrates—in a unified platform—several of R packages commonly used in the analysis of RNA-Seq data.