Sequencing-based microbiome profiling aims at detecting and quantifying individual members of a microbial community in a culture-independent manner. While amplicon-based sequencing (ABS) of bacterial or fungal ribosomal DNA is the most widely used technology due to its low cost, it suffers from PCR amplification biases that hinder accurate representation of microbial population structures. Shotgun metagenomics (SMG) conversely allows unbiased microbiome profiling but requires high sequencing depth.

Here researchers from ASTAR, Singapore report the development of a meta-total RNA sequencing (MeTRS) method based on shotgun sequencing of total RNA and benchmark it on a human stool sample spiked in with known abundances of bacterial and fungal cells. MeTRS displayed the highest overall sensitivity and linearity for both bacteria and fungi, the greatest reproducibility compared to SMG and ABS, while requiring a ~20-fold lower sequencing depth than SMG.

Comparison of the reproducibility of 16S sequencing, SMG and MeTRS 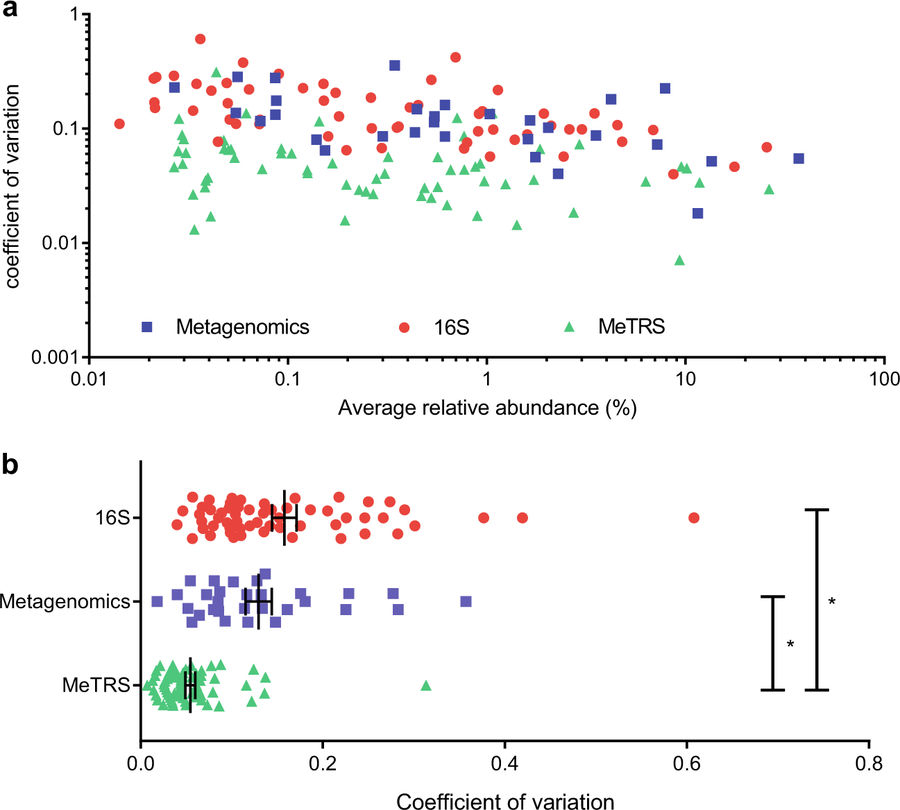 a For each genus that was detected in all seven samples (30 for SMG, 58 for 16S and 64 for MeTRS), a coefficient of variation (CV) was calculated for each sequencing method. CVs are plotted as a function of the average relative abundance of the corresponding genus across the seven samples. b Unpaired t-test with Welch’s correction was performed on these CVs. Error bars represent standard errors of the mean. *p < 0.0001