The use of high-throughput RNA sequencing (RNA-seq) has revealed an extraordinarily diverse population of functional RNAs present in cells. However, current approaches poorly detect RNAs that are highly modified and/or extensively folded, such as tRNAs. The complementary methods of Zheng et al.1 and Cozen et al.2 have now overcome many of the technical hurdles for globally sequencing tRNAs by biochemically removing select tRNA modifications before RNA-seq library preparation. These clever strategies have revealed new insights into tRNA regulation and should be useful for identifying other modified RNAs.

Although tRNAs have often been considered abundant ‘housekeeping’ RNAs, recent work has revealed that tRNAs are tightly regulated and play a role in controlling cell physiology3. Differences in tRNA expression patterns allow distinct translational programs to be expressed in proliferating versus differentiated cells4, and even modest overexpression of the initiator methionine tRNA is sufficient to induce cell proliferation5. In addition, tRNAs can be cleaved into smaller RNAs, some of which regulate cell proliferation and are more abundant than well-characterized microRNAs6. There is thus a pressing need to better understand how tRNAs are globally regulated by cellular cues.

Standard RNA-seq methods rely on ligating adaptor oligonucleotides to the ends of RNAs followed by reverse transcription using a primer complementary to the 3′ adaptor7. This works wells for most transcripts, but tRNAs are notable exceptions for two key reasons. First, mature tRNAs adopt a compact tertiary structure, which limits the efficiency of adaptor ligation and sterically interferes with cDNA synthesis. Second, an average of 8 or more nucleotides per tRNA are post-transcriptionally modified to ensure proper tRNA folding and/or translational fidelity, with the changes often occurring on the Watson-Crick face of the base8. These base alterations include so-called ‘hard-stop’ modifications—such as N1-methyladenosine (m1A) and N1-methylguanosine (m1G)—that block extension by reverse transcriptase (RT). As a result, current RNA-seq methods often yield only truncated sequences from a large subset of tRNAs (read more…) 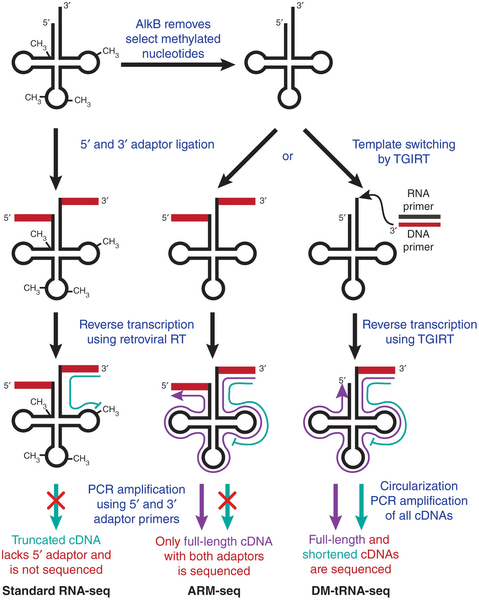