MicroRNAs (miRNAs) have been found to be differentially expressed during cotton fibre development. However, which specific miRNAs and how they are involved in fibre development is unclear. Here, using deep sequencing, 65 conserved miRNA families were identified and 32 families were differentially expressed between leaf and ovule. At least 40 miRNAs were either leaf or ovule specific, whereas 62 miRNAs were shared in both leaf and ovule. qRT-PCR confirmed these miRNAs were differentially expressed during fibre early development. A total of 820 genes were potentially targeted by the identified miRNAs, whose functions are involved in a series of biological processes including fibre development, metabolism and signal transduction. Many predicted miRNA-target pairs were subsequently validated by degradome sequencing analysis. GO and KEGG analyses showed that the identified miRNAs and their targets were classified to 1027 GO terms including 568 biological processes, 324 molecular functions and 135 cellular components and were enriched to 78 KEGG pathways. At least seven unique miRNAs participate in trichome regulatory interaction network. Eleven trans-acting siRNA (tasiRNA) candidate genes were also identified in cotton. One has never been found in other plant species and two of them were derived from MYB and ARF, both of which play important roles in cotton fibre development. Sixteen genes were predicted to be tasiRNA targets, including sucrose synthase and MYB2. Together, this study discovered new miRNAs in cotton and offered evidences that miRNAs play important roles in cotton ovule/fibre development. The identification of tasiRNA genes and their targets broadens our understanding of the complicated regulatory mechanism of miRNAs in cotton. 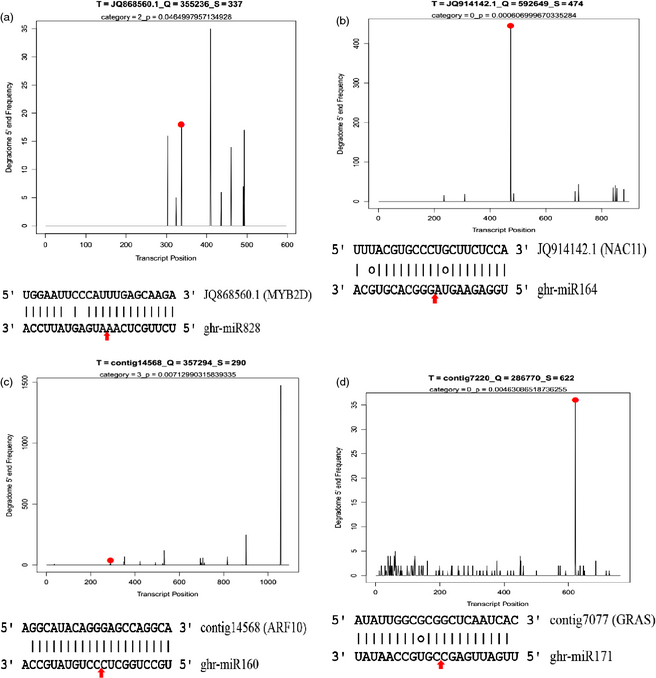