In small RNA (smRNA) sequencing studies, highly abundant molecules such as adapter dimer products and tissue-specific microRNAs (miRNAs) inhibit accurate quantification of lowly expressed species. Researchers from the HudsonAlpha Institute for Biotechnology previously developed a method to selectively deplete highly abundant miRNAs. However, this method does not deplete adapter dimer ligation products that, unless removed by gel-separation, comprise most of the library. Here, they have adapted and modified recently described methods for CRISPR/Cas9-based Depletion of Abundant Species by Hybridization (‘DASH’) to smRNA-seq, which they have termed miRNA and Adapter Dimer-DASH (MAD-DASH). In MAD-DASH, Cas9 is complexed with single guide RNAs (sgRNAs) targeting adapter dimer ligation products, alongside highly expressed tissue-specific smRNAs, for cleavage in vitro. This process dramatically reduces adapter dimer and targeted smRNA sequences, can be multiplexed, shows minimal off-target effects, improves the quantification of lowly expressed miRNAs from human plasma and tissue derived RNA, and obviates the need for gel-separation, greatly increasing sample throughput. Additionally, the method is fully customizable to other smRNA-seq preparation methods. Like depletion of ribosomal RNA for mRNA-seq and mitochondrial DNA for ATAC-seq, our method allows for greater proportional read-depth of non-targeted sequences.

Depletion of adapter dimer and overabundant miRNAs with MAD-DASH 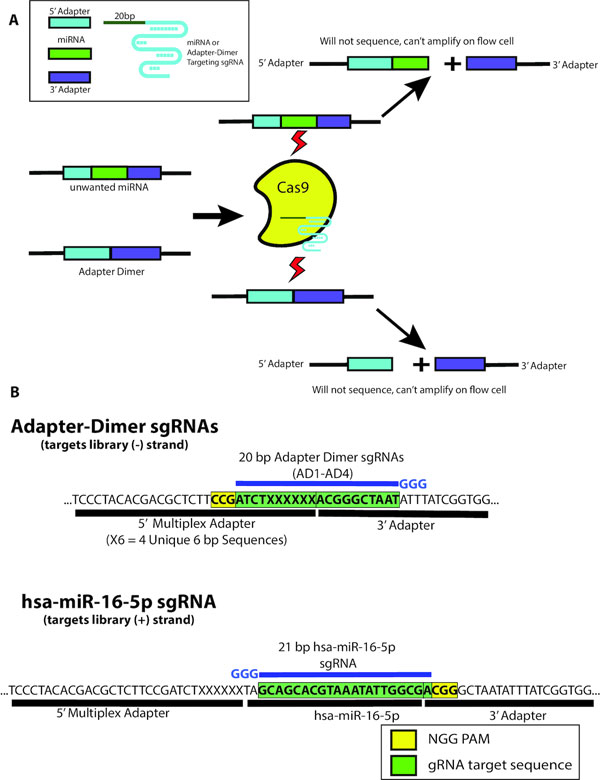 (A) MAD-DASH employs Cas9 and adapter dimer- or miRNA-specific sgRNAs to selectively deplete these sequences from final libraries. Cleaved sequences will not amplify during the second round of PCR amplification, and are also no longer suitable substrates for bridge amplification during Illumina sequencing (though they will still be able to bind to the flow-cell using the P5/P7 sequences remaining on each cleaved library). (B) Design of adapter dimer and hsa-miR-16–5p sgRNAs using available pre-existing PAM sites on our smRNA-seq 5′- and 3′-adapters. Adapter dimer targeting sgRNAs use a minus strand ‘NGG’ and have 10 bp of homology to both the 5′- and 3′ adapter, ensuring target cleavage specificity for adapter dimer sequences. hsa-miR-16–5p uses a 3′ PAM site one base away from the 3′—adapter ligation junction, which can be generalized to other smRNAs and provides highly specific targeting while minimizing off-targets. Shown are only the plus strand of non-PCR tailed sequences. Green boxes indicate the plus strand sequence corresponding to sgRNA location in the dsDNA library, while the yellow box indicates the plus strand location of the ‘NGG’ PAM in the dsDNA library. sgRNA location is depicted in blue along with the three 5′ ‘G’ nucleotides necessary for high levels of T7 in vitro transcription. 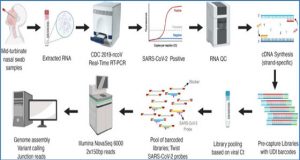