Next Generation Sequencing (NGS) experiments produce millions of short sequences that, mapped to a reference genome, provide biological insights at genomic, transcriptomic and epigenomic level. Typically the amount of reads that correctly maps to the reference genome ranges between 70% and 90%, leaving in some cases a consistent fraction of unmapped sequences. This ‘misalignment’ can be ascribed to low quality bases or sequence differences between the sample reads and the reference genome. Investigating the source of the unmapped reads is definitely important to better assess the quality of the whole experiment and to check for possible downstream or upstream ‘contamination’ from exogenous nucleic acids.

Researchers at the National Research Council of Italy propose DecontaMiner, a tool to unravel the presence of contaminating sequences among the unmapped reads. It uses a subtraction approach to identify bacteria, fungi and viruses genome contamination. DecontaMiner generates several output files to track all the processed reads, and to provide a complete report of their characteristics. The good quality matches on microorganism genomes are counted and compared among samples. DecontaMiner builds an offline HTML page containing summary statistics and plots. The latter are obtained using the state-of-the-art D3 javascript libraries. DecontaMiner has been mainly used to detect contamination in human RNA-Seq data. DecontaMiner is a tool designed and developed to investigate the presence of contaminating sequences in unmapped NGS data. It can suggest the presence of contaminating organisms in sequenced samples, that might derive either from laboratory contamination or from their biological source, and in both cases can be considered as worthy of further investigation and experimental validation. The novelty of DecontaMiner is mainly represented by its easy integration with the standard procedures of NGS data analysis, while providing a complete, reliable, and automatic pipeline. 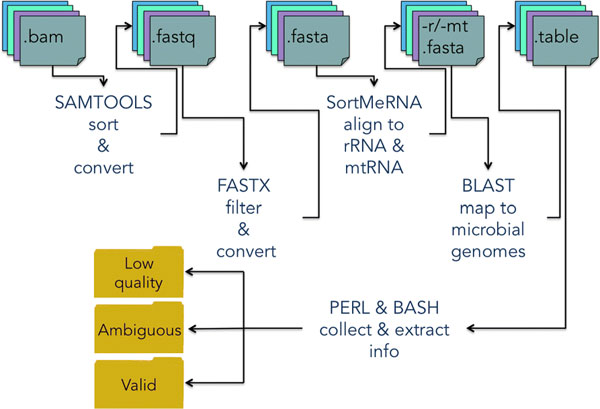 The tools and the relative functions, input and output file formats are shown. The outputs are grouped in three main directories: ‘Low quality’, ‘Ambiguous’ and ‘Valid’, which collect the result files of each analyzed sample

Availability – The software is freely available at http://www-labgtp.na.icar.cnr.it/decontamine