Single-cell technologies have recently gained popularity in cellular differentiation studies regarding their ability to resolve potential heterogeneities in cell populations. Analysing such high-dimensional single-cell data has its own statistical and computational challenges. Popular multivariate approaches are based on data normalisation, followed by dimension reduction and clustering to identify subgroups. However, in the case of cellular differentiation, we would not expect clear clusters to be present but instead expect the cells to follow continuous branching lineages.

Here researchers from Helmholtz Zentrum München propose the use of diffusion maps to deal with the problem of defining differentiation trajectories. They adapt this method to single-cell data by adequate choice of kernel width and inclusion of uncertainties or missing measurement values, which enables the establishment of a pseudo-temporal ordering of single cells in a high-dimensional gene expression space. They expect this output to reflect cell differentiation trajectories, where the data originates from intrinsic diffusion-like dynamics. Starting from a pluripotent stage, cells move smoothly within the transcriptional landscape towards more differentiated states with some stochasticity along their path. The researchers demonstrate the robustness of their method with respect to extrinsic noise (e.g. measurement noise) and sampling density heterogeneities on simulated toy data as well as two single-cell quantitative polymerase chain reaction (qPCR) data sets (i.e. mouse haematopoietic stem cells and mouse embryonic stem cells) and an RNA-Seq data of human pre-implantation embryos. They show that diffusion maps perform considerably better than Principal Component Analysis (PCA) and are advantageous over other techniques for non-linear dimension reduction such as t-distributed Stochastic Neighbour Embedding (t-SNE) for preserving the global structures and pseudotemporal ordering of cells.

Availability – The Matlab implementation of diffusion maps for single-cell data is available at https://www.helmholtz-muenchen.de/icb/single-cell-diffusion-map 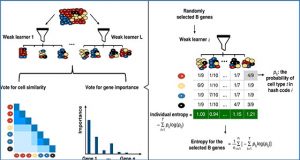 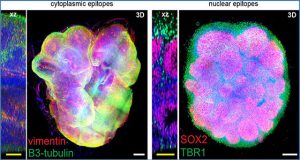