By disrupting the expression of a particular gene and observing how this change affects expression of other genes, researchers can learn about the cellular roles of the disrupted gene.  New technologies such as Perturb-seq offer unprecedented detail and depth of insight from such genetic disruption studies, but technical and practical hurdles have limited use of Perturb-seq. A new study by Princeton University researcher Britt Adamson and colleagues at the University of California-San Francisco and biotech company 10X Genomics, which was published March 30th in the journal Nature Biotechnology, aims to change that.

“We present several improvements to this approach, which together lay the groundwork for performing Perturb-seq screens at larger scale and with combinatorial perturbations,” said Adamson, an assistant professor of molecular biology and the Lewis-Sigler Institute for Integrative Genomics.

The first step in Perturb-seq is to perturb a set of target genes. This is accomplished using one of a suite of CRISPR-based technologies to edit a cell’s genome.

CRISPR techniques are adapted from a defense system found in bacteria and archaea. These organisms contain stretches of DNA (known as clustered regularly interspaced palindromic repeats, or CRISPRs) captured from the viruses that infect them. Bacteria and archaea use CRISPR sequences  to produce RNA fragments that guide CRISPR-associated (Cas) enzymes to viral genomes (DNA, or in some cases RNA). Once there, these enzymes cut up the bound genome and halt infection.

Scientists have repurposed these systems for use in animal cells by using synthetic RNAs called “guides,” or sgRNAs, which can target Cas enzymes to a cell’s own DNA. There, cleavage introduces heritable mutations and disrupts targeted genes. Alternatively, scientists can employ an inactivated version of Cas that binds to target genes and prevents (CRISPRi) or enhances (CRISPRa) the gene’s expression.

The second step in Perturb-seq is to investigate how the perturbation of targeted genes affects the pattern of other genes expressed by cells. This is done using a technique called single-cell RNA sequencing (scRNA-seq), which provides a read-out of gene expression from individual cells. In short, scRNA-seq collects and tags the molecules expressed by genes (called messenger RNAs, or mRNAs) from individual cells within a population of cells.

Using computers, researchers can then read the tags attached to mRNA sequences and group together mRNA identities from each cell. This allows the researchers to evaluate gene expression profiles, or “transcriptomes,” from each cell to determine how cells are similar or different from each other.

Importantly, in Perturb-seq, input cell populations carry CRISPR-based perturbations, and because sgRNAs are the key to mapping assembled transcriptomes to those perturbations, sgRNA identities must also be determined for each cell. However, sgRNAs are not captured by standard scRNA-seq methods. Therefore, to conduct Perturb-seq experiments, researchers have previously relied on methods of indirect mapping. Such methods are plagued by technical limitations. For example, they’re difficult to use when multiple sgRNAs are delivered to each cell.

These are the problems Adamson and her collaborators, led by first author Joseph M. Replogle, an M.D.-Ph.D. trainee at the University of California-San Francisco, wanted to solve.

These new protocols, which the researchers call “direct capture Perturb-seq,” provide a way to capture and amplify sgRNAs alongside the cellular transcriptome during scRNA-seq. Importantly, direct capture Perturb-seq allows researchers an easy way to track the presence of multiple sgRNAs in individual cells, which the team showed can also be useful for improving CRISPRi.

To demonstrate other ways in which direct-capture Perturb-seq might be applied, the authors used it to replicate and extend the results of an earlier study. The initial study, which examined the effects of disrupting pairs of genes on cell growth, demonstrated that blocking expression of certain genes involved in cholesterol biosynthesis causes buildup of a metabolic intermediate that damages a cell’s DNA. With direct capture Perturb-seq, the researchers were able to rapidly characterize how cells respond to repression of those genes, develop a model for how cells manage the effects of that intermediate, and discover what happens to cells when they cannot.

As a second improvement, the team also enabled mRNAs from particular genes of interest to be enriched from scRNA-seq transcriptomes, making scRNA-seq experiments like the ones described above cheaper to perform. “Together, these improvements should help researchers expand the scale of Perturb-seq experiments and better enable efforts to study how genes work,” Adamson said. 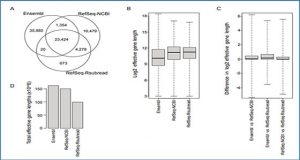