Diversity of human tRNA genes from the 1000-genomes project 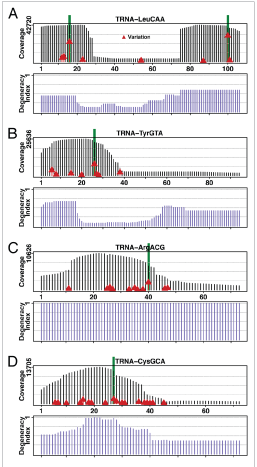 Here researchers at the University of Chicago capitalize on the sequencing data from the 1000-genomes project to examine the diversity of tRNA genes in the human population. Previous analysis of the reference human genome indicated an unexpected large number of diverse tRNA genes beyond the necessity of translation, suggesting that some tRNA transcripts may perform non-canonical functions. They found 24 new tRNA sequences in>1% and 76 new tRNA sequences in>0.2% of all individuals, indicating that tRNA genes are also subject to evolutionary changes in the human population. Unexpectedly, two abundant new tRNA genes contain base-pair mismatches in the anticodon stem. They experimentally determined that these two new tRNAs have altered structures in vitro; however, one new tRNA is not aminoacylated but extremely stable in HeLa cells, suggesting that this new tRNA can be used for non-canonical function. These results show that at the scale of human population, tRNA genes are more diverse than conventionally understood, and some new tRNAs may perform non-canonical, extra-translational functions that may be linked to human health and disease.