A variety of extremely challenging biological sequence analyses were conducted on the XSEDE large shared memory resource Blacklight, using current bioinformatics tools and encompassing a wide range of scientific applications. These include genomic sequence assembly, very large metagenomic sequence assembly, transcriptome assembly, and sequencing error correction. The data sets used in these analyses included uncategorized fungal species, reference microbial data, very large soil and human gut microbiome sequence data, and primate transcriptomes, composed of both short-read and long-read sequence data. A new parallel command execution program was developed on the Blacklight resource to handle some of these analyses. These results, initially reported previously at XSEDE13 and expanded here, represent significant advances for their respective scientific communities. The breadth and depth of the results achieved demonstrate the ease of use, versatility, and unique capabilities of the Blacklight XSEDE resource for scientific analysis of genomic and transcriptomic sequence data, and the power of these resources, together with XSEDE support, in meeting the most challenging scientific problems. 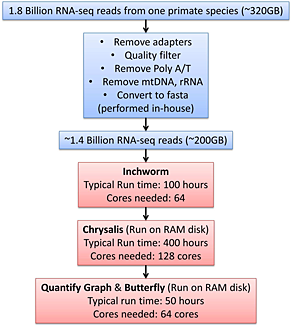 One of the potential advantages of Blacklight’s massive shared memory architecture is to enable scientists and developers to quickly prototype new parallel solutions to their research problems. As a simple example, when working with very large genomic data sets or other very large volume data, researchers often encounter circumstances where a heterogeneous group of large memory commands need to be executed expeditiously. While working with Trinity on Blacklight, a researcher and Trinity developer was able to quickly design a program to efficiently execute parallel commands that require large amounts of shared memory during the QuantifyGraph and Butterfly stages of Trinity. This program, Parafly, uses C++ and OpenMP to launch a large set of jobs with varying memory requirements, filling the need for a versatile parallel execution program within Trinity. Parafly accepts a flat file with the group of commands that a user wishes to execute for input, placing minimal requirements on the end user for operation. The program operates by loading all commands to be executed into an array data structure, assigning thread conditions to each command to be executed, then executes each command in parallel while logging the exit status of each command. Parafly was incorporated into the main Trinity code, and since then has been spun off as a separate project and extended to efficiently execute any group of tasks that require a large amount of shared memory per system thread.

Availability – The Parafly resource can be found for download at http://parafly.sourceforge.net/.