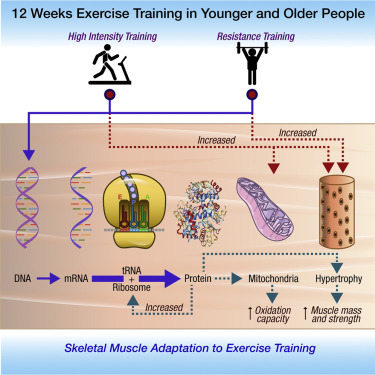 Researchers have long suspected that the benefits of exercise extend down to the cellular level, but know relatively little about which exercises help cells rebuild key organelles that deteriorate with aging.

A study published March 7 in Cell Metabolism found that exercise — and in particular high-intensity interval training in aerobic exercises such as biking and walking — caused cells to make more proteins for their energy-producing mitochondria and their protein-building ribosomes, effectively stopping aging at the cellular level.

The lead author, Nair of the Mayo Clinic stressed that the focus of this study wasn’t on developing recommendations, but rather on understanding how exercise helps at the molecular level. As we age, the energy-generating capacity of our cells’ mitochondria slowly decreases.

By comparing proteomic and RNA-sequencing data from people on different exercise programs, the researchers found evidence that exercise encourages the cell to make more RNA copies of genes coding for mitochondrial proteins and proteins responsible for muscle growth. Exercise also appeared to boost the ribosomes’ ability to build mitochondrial proteins. The most impressive finding was the increase in muscle protein content.

The researchers also found a robust increase in mitochondrial protein synthesis. Increase in protein content explains enhanced mitochondrial function and muscle hypertrophy. Exercise’s ability to transform these key organelles could explain why exercise benefits our health in so many different ways.

Muscle is somewhat unique because muscle cells divide only rarely. Like brain and heart cells, muscle cells wear out and aren’t easily replaced. Functions in all three of those tissues are known to decline with age. “Unlike liver, muscle is not readily regrown. The cells can accumulate a lot of damage,” Nair explains.

However, if exercise restores or prevents deterioration of mitochondria and ribosomes in muscle cells, there’s a good chance it does so in other tissues, too. Understanding the pathways that exercise uses to work its magic may make aging more targetable. Nair and his colleagues hope to find out more about how exercise benefits different tissues throughout the body. They are also looking into ways that clinicians may be able to target the pathways that confer the most benefits. However, for the time being, vigorous exercise remains the most effective way to bolster health.

“There are substantial basic science data to support the idea that exercise is critically important to prevent or delay aging,” says Nair. “There’s no substitute for that.”