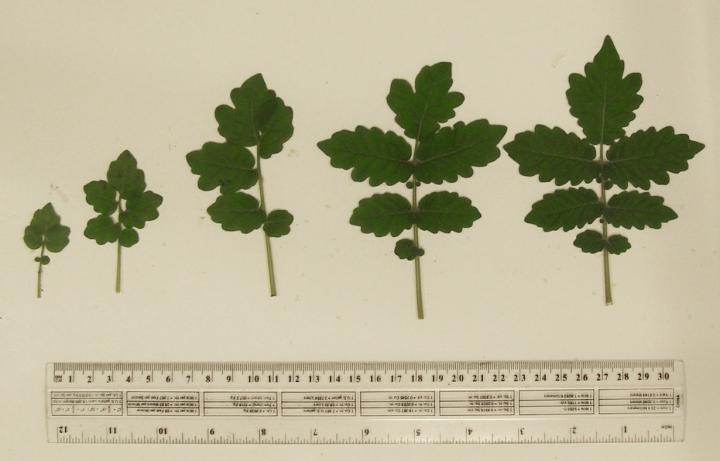 Maloof and Sinha analyzed the effects of various light environments on leaf development for both the wild and cultivated tomato species.

University of Texas at Austin, Texas Advanced Computing Center – Plant biologist Julin Maloof met fellow researcher Neelima Sinha while beginning his career at the University of California, Davis. Both interested in plant morphology and natural variation, the two first collaborated on a proposal more than six years ago and continue to work together to examine how plants thrive in disparate environments.

“We want to understand the fundamental mechanisms of leaf development — how they form, how they develop, and how they function appropriately,” Sinha said. “We’re also interested in how plants change in response to various light environments.”

Their recent findings are paving a path toward improving how tomatoes respond to stress. They also provide pertinent information about the wild and cultivated tomato genomes that was previously unknown to other biologists. The work has been featured in publications including Nature Genetics and The Plant Cell. Sinha’s work developing a transcriptomic atlas of the Calulerpa taxifolia plant was also published January 2015 in PLOS Genetics.

Initially, Maloof studied the Arabidopsis plant and Sinha worked on maize, but later they shifted their focus to various tomato species. With its variation in type, response to light, and leaf shape, the tomato gives the researchers the opportunity to explore leaf development and shade avoidance from a larger genomic perspective.

“The amazing thing about tomatoes is that they’ve adapted to grow in wildly different habitats — from right at the coast where they’re getting splashed by salt all the way up to 10,000 feet in the Andean desert,” Maloof said. “We can also mate and cross them, so they’re a great resource to perform genetics.”

Deep into their studies of plant life, an explosion of data and significant price drop in RNA sequencing allowed Maloof and Sinha to expand the scope of their research. “Suddenly, we had 20 times more data than we planned, which allowed us to explore additional species,” Sinha said.

However, this explosion of data also necessitated computational power.

Maloof and Sinha turned to the iPlant Collaborative, a national cyberinfrastructure of advanced computing resources that allows life sciences researchers to manage their data and perform analyses on big datasets in a collaborative environment.

“We had a couple of Linux server machines here, but suddenly everything was beyond capacity,” Maloof said. “iPlant became a game changer for our way of thinking.”

Using iPlant’s Atmosphere, a cloud service that allows users to operate their own virtual machines, the researchers were able to better organize and analyze their data. The team also took advantage of iPlant’s Data Store to manage their terabytes of data and share it with other researchers.

Working with iPlant staff also helped Maloof and Sinha expand their reach to the Extreme Science and Engineering Discovery Environment (XSEDE), a virtual system that scientists use to share computing resources, data and expertise. Through XSEDE, they acquired an allocation on Lonestar, a powerful supercomputer at the Texas Advanced Computing Center (TACC) in Austin.

“iPlant allowed us to take advantage of all the data we acquired and further our study of the tomato genome,” Sinha said. “And two transcriptome assemblies were completed entirely on Lonestar, which led to my paper on the Caulerpa taxifolia plant. These resources have been invaluable to our research.”

Armed with these computational resources, the researchers addressed a major challenge in biology, understanding the genetic basis for structural evolution in the tomato. Maloof and Sinha performed RNA sequencing for both the wild and cultivated tomato species, which allowed them to complete two transcriptome assemblies, improving the annotation for the genome. The current research also shed light on the effects that artificial and natural selection had on the transcriptomes of cultivated and wild species, improving upon the existing genetic resource for other plant biologists.

According to Maloof, they found the correlation between the leaf shape and amount of sugars in the fruit to be of interest.

“We knew that leaf size would affect photosynthesis, but we found photosynthesis is affected by the shape of the leaf independent of size,” Maloof said. “It’s a previously unexplored relationship we’re trying to tease apart.”

Not only has Maloof and Sinha’s work advanced the scientific research community, but the duo are beginning to explore ways their research can positively impact the crop industry.

“Our initial research focused on looking at connections between leaves and how plants grow in response to light,” Sinha said. “Now we’re moving more into how plants respond to stress, and if we can harness those characteristics to make more stress-resistant crops. With the increased variability in climate it is important to develop crops varieties that can better withstand periods of prolonged heat or drought.”

In terms of next steps and near future work, Maloof and Sinha have submitted proposals to examine how plants cope with these extreme habitats, and how this knowledge can be applied to the biotechnology and crop industries.