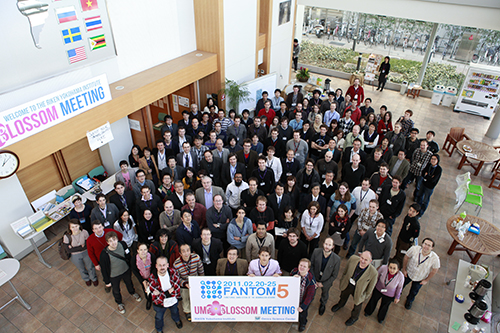 FANTOM, a large international consortium led by RIKEN releases today the first comprehensive map of gene activity across the human body, and provides the first holistic view of the complex networks that regulate gene expression across the wide variety of cell types that make up a human being. These findings will help in the identification of genes involved in disease and the development of personalized and regenerative medicine.

After many years of concerted effort to systematically analyze the expression of genes in all human cells and tissues, RIKEN and the FANTOM consortium publish the findings today in two landmark Nature reports, and 16 related articles in ten other scholarly journals (ref.1,2,3).

The papers published in Nature describe maps of promoters and enhancers – short regions of DNA that influence the activity of genes – encoded in the human genome, and their activity across the vast wealth of human cell types and tissues of the human body. Together with the other studies published by FANTOM5, this data provides the first complete view of the networks regulating transcription across all cell types.

The FANTOM project (for Functional Annotation of the Mammalian genome) is a RIKEN initiative launched in 2000 to build a complete library of human genes using the capabilities offered by new, state-of-the-art cDNA technologies. Over 250 experts in primary cell biology and bioinformatics from 114 institutions based in more than 20 countries and regions worked as part of FANTOM 5, the 5th edition of the project, to produce the 18 studies published today.

Using a highly sensitive technique called Cap Analysis of Gene Expression (CAGE), developed at RIKEN (ref. 4, 5), the researchers monitored the activity of promoters and enhancers across over 180 human primary cells. They identified 180,000 promoters and 44000 enhancers on the genome and find that the activity of the large majority of these transcriptional regulation regions is highly specific to cell type.

“Humans are complex multicellular organisms composed of at least 400 distinct cell types. This beautiful diversity of cell types allow us to see, think, hear, move and fight infection yet all of this is encoded in the same genome. The difference between all these cells is what parts of the genome they use – for instance, brain cells use different genes than liver cells, and therefore they work very differently. In FANTOM5, we have for the first time systematically investigated exactly what genes are used in virtually all cell types across the human body, and the regions which determine where the genes are read from the genome,” explains Dr. Alistair Forrest, scientific coordinator of FANTOM5.

Unlike other large-scale genomics projects, FANTOM5 focused on identifying gene expression on normal primary cells rather than cell lines derived from cancers. “In FANTOM5 we made the decision early on that we should include a large focus on normal primary cells and tissues. Although cell lines are easy to use, they are seldom good models of normal cells, ” said Dr. Forrest.

A key discovery on the way was that by employing CAGE, the technology used to find active genes, the team could identify the additional DNA regions that regulate the activity of genes in every cell type, called enhancers. “We found that CAGE is a lot more specific than competing methods, and still can be used on small cell samples – this has a huge potential, because it opens up the door for analyzing tissue samples from people suffering from disease and find out what is wrong on a molecular level,” said Professor Albin Sandelin, one of the coordinators for the enhancer project.

“What is written in the genome? Answering this question has been the consortium’s ultimate goal since the beginning. The basic library of cell definition that was produced during FANTOM5 is a remarkable step to manipulating cells. The library will be an essential resource for developing a wide rage of technologies for the life sciences, that will lead to the development of regenerative and personalized medicine in the near future,” Dr. Yoshihide Hayashizaki, the general Director of FANTOM said.

“Omics science, the study and systematic mapping of the molecules that make up an organism, has yielded one insightful surprise after another. Life, however, remains largely elusive. We will continue to search for the basic molecular mechanism underlying the wide diversity of cells, to provide deeper insights into life science that will lead to improved medical treatment, “ Dr. Hayashizaki added.