from ars technica by Diana Gitig

They’re called identical twins because their genomes are identical. But even though all of their DNA is the same, they clearly are not. The environment must play a role in how identical twins—and everyone else—uses their genes to become who they are.

Everybody has two copies of each gene; one from our mother and one from our father. Each of these is called an allele. DNA and RNA sequencing technologies have advanced to the point where allele-specific expression can now be quantified. In other words, we can see, within one individual, if the mom’s gene is producing more or less than the dad’s version. Allele-specific expression levels of a given gene may differ between individuals even if the total activity of that gene does not.

Since twins share all of their DNA, any allele-specific differences in expression between them can’t be explained by genetic sequences and must be due to environmental factors.

Using data from 400 pairs of female identical twins, geneticists have concluded that about half of the difference in allele-specific expression of genes is attributable to differences in genetic sequences close to the gene in question. So the other half is due to other kinds of genetic influences: differences in gene sequences that are far away, like on other chromosomes, and environmental factors.

The scientists used cells from blood, skin, fat, and lymphoblastoid cell lines—cell lines derived from antibody-producing B cells. In the lymphoblastoid cells and in fat, they found genes with differing allele-specific expression between two twins. These were genes with expression that was already be known to be impacted by environmental factors. One was a gene in the lymphoid cells that is induced by exposure to the Epstein-Barr virus and two genes in fat that respond to diet and exercise.

The authors propose a model in which differences in allele-specific gene expression levels are primarily due to genetic variability in sequences close to the gene, but the magnitude of that difference can be altered by genetic elements that are further away. But those genetic factors don’t account for everything, which leaves space for environmental influences. 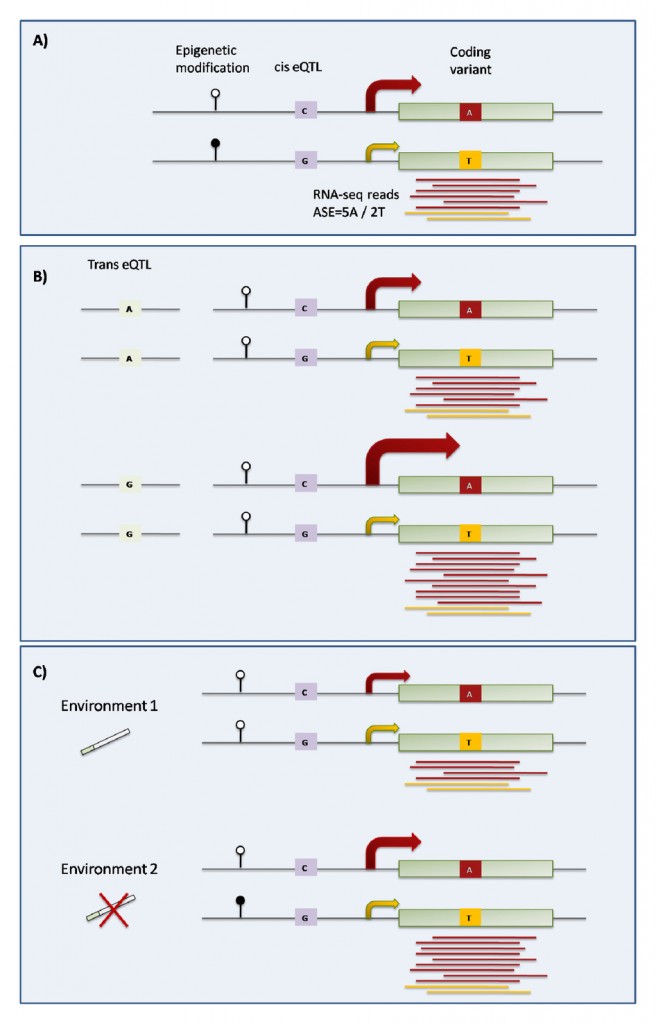