GASS – genome structural annotation for Eukaryotes based on species similarity

With the development of high-throughput sequencing techniques, more and more genomes were sequenced and assembled. However, annotating a genome’s structure rapidly and expressly remains challenging. Current eukaryotic genome annotations require various, abundant supporting data, such as: species-specific and cross-species protein sequences, ESTs, cDNA and RNA-Seq data. Collecting those data and merging their analytical results to achieve a consistent complete annotation is a complex, time and cost consuming task.

Now, researchers from Xiamen University have developed a fast and easy-to-use computational tool: GASS (Genome Annotation based on Species Similarity). It annotates a eukaryotic genome based on only the annotations from another similar species. With aligning the exons’ sequences of an annotated similar species to the un-annotated genome, GASS detects the optimal transcript annotations with a shortest-path model. In this study, GASS was used to achieve the rhesus annotations based on the human annotations. The produced annotations were evaluated by comparing them to the two existing rhesus annotation databases (RefSeq and Ensembl) directly and being aligned with three RNA-Seq data of rhesus. The experiment results showed that more than 65% RefSeq exons and splicing junctions were exactly found by GASS. GASS’s sensitivity was higher than RefSeq’s, and was close to Ensembl’s. GASS had higher specificities than Ensembl at gene, transcript, exon and splicing junction levels. We also found the mis-assemblies of rheMac3 genome, which led to the 2 bp shifts in annotating position on exons’ boundary and then the incomplete splicing canonical sites in Refseq annotations. These detections were further supported by various data sources. 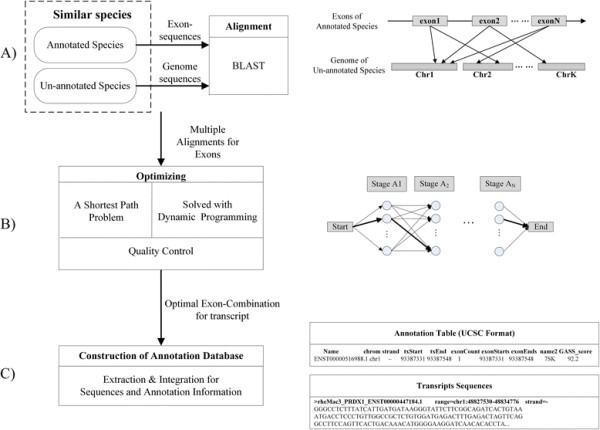 GASS quickly produces structural genome annotations in sufficient abundance and accuracy. With simple and rapid running of GASS, small labs can create quick views of genome annotations for an un-annotated species, without the necessity to create, collect, analyze and synthesize extra various data sources, or wait several months for the annotations from professional organizations. GASS can be applied to many study occasions, such as the analysis of RNA-Seq datasets from the unannotated species whose genome drafts are available but the annotations are not.

Availability – GASS is coded with Python and implemented as a processing pipeline with UNIX shell. The GASS Pseudo code is shown in Additional file 1 The GASS source codes are available at http://gassflow.codeplex.com/