Large sections of the genome that were once referred to as “junk” DNA have been linked to human heart failure, according to research from Washington University School of Medicine in St. Louis.

So-called junk DNA was long thought to have no important role in heredity or disease because it doesn’t code for proteins. But emerging research in recent years has revealed that many of these sections of the genome produce RNA molecules that, despite not being proteins, still have important functions in the body. RNA is a close chemical cousin to DNA. 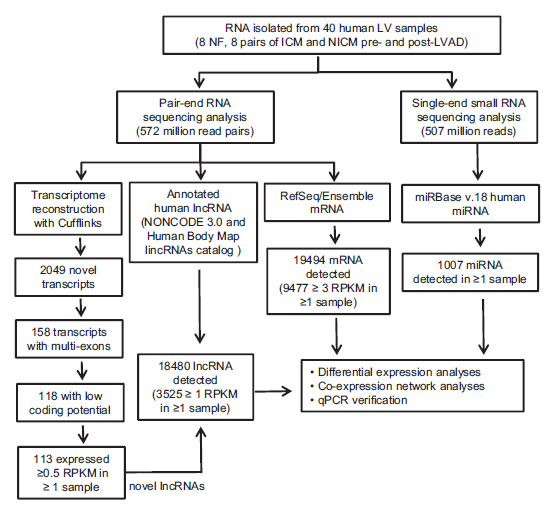 Molecules now associated with these sections of the genome are called noncoding RNAs. They come in a variety of forms, some more widely studied than others. Of these, about 90 percent are called long noncoding RNAs, and exploration of their roles in health and disease is just beginning.

In a recent issue of the journal Circulation, Washington University investigators report results from the first comprehensive analysis of all RNA molecules expressed in the human heart. The researchers studied nonfailing hearts and failing hearts before and after patients received pump support from left ventricular assist devices (LVAD). The LVADs increased each heart’s pumping capacity while patients waited for heart transplants.

“We took an unbiased approach to investigating which types of RNA might be linked to heart failure,” said senior author Jeanne M. Nerbonne, PhD, the Alumni Endowed Professor of Molecular Biology and Pharmacology. “We were surprised to find that long noncoding RNAs stood out. In fact, the field is evolving so rapidly that when we did a slightly earlier, similar investigation in mice, we didn’t even think to include long noncoding RNAs in the analysis.”

Heart failure refers to a gradual loss of heart function. The left ventricle, the heart’s main pumping chamber, becomes less efficient. Blood flow diminishes, and the body no longer receives the oxygen needed to go about daily tasks. Sometimes the condition develops after an obvious trigger such as a heart attack or infection, but other times the causes are less clear.

In the new study, the investigators found that unlike other RNA molecules, expression patterns of long noncoding RNAs could distinguish between two major types of heart failure and between failing hearts before and after they received LVAD support.

“We don’t know whether these changes in long noncoding RNAs are a cause or an effect of heart failure,” Nerbonne said. “But it seems likely they play some role in coordinating the regulation of multiple genes involved in heart function.”

Nerbonne pointed out that all types of RNA molecules they examined could make the obvious distinction: telling the difference between failing and nonfailing hearts. But only expression of the long noncoding RNAs was measurably different between heart failure associated with a heart attack (ischemic) and heart failure without the obvious trigger of blocked arteries (nonischemic). Similarly, only long noncoding RNAs significantly changed expression patterns after implantation of left ventricular assist devices.

Because of the difficulty in obtaining human heart tissue, the study’s sample size was relatively small, Nerbonne said. Her team analyzed eight nonfailing hearts, eight hearts in ischemic heart failure and eight hearts in nonischemic heart failure. Though small, the study is unique because each of the 16 failing hearts was sampled twice, once before and once after LVAD support.

According to Nerbonne, this before-and-after sampling of heart tissue is an unusual feature of this study and one of its strengths. Cardiac surgeons first removed a sample of heart tissue while implanting the LVAD. Then, months later, transplant surgeons sampled the same failing hearts when each patient received a new donor organ. Previous studies comparing heart function before and after implanting a pump used samples taken from different patients.

This double sampling of the same organ is important for understanding what is happening on a molecular level to failing heart tissue when a pump literally takes some of the load off.

“It’s clear that some patients experience a change in the structure and physiology of the heart tissue following pump support, and in some patients that change results in improved heart function,” Nerbonne said. “One interesting question is whether these long noncoding RNAs could be a measure of whether the failing heart is getting better with an LVAD.”

Nerbonne also is interested in exploring whether measures of long noncoding RNAs could be an early predictor of the disease, ideally before symptoms of heart failure even develop.

Nerbonne pointed out that this study was made possible by a number of important resources, including recent advances in genome sequencing and the availability of tissues through the Washington University Translational Cardiovascular Biobank & Repository (TCBR).

Continuing to plumb these largely unexplored parts of the genome, Nerbonne and her colleagues plan to continue to work closely with the TCBR to facilitate studies of long noncoding RNAs in other cardiac conditions. Specifically, they are interested in atrial fibrillation, the most common irregular heart rhythm, and in comparing adult versus pediatric heart failure, an analysis that may illuminate the role of noncoding RNA in the heart’s early development.

This work was supported by the National Heart, Lung and Blood Institute (NHLBI) of the National Institutes of Health (NIH) and the NIH National Center for Research Resources, which funds the Washington University Institute of Clinical and Translational Sciences (ICTS). (Grant numbers R01 HL-034161, HL-066388, R01 HL-111094 and UL1 RR024992).