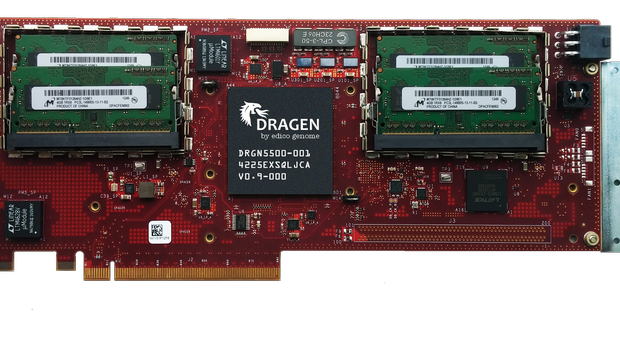 A super-fast genome processor called the Dragen Bio-IT Processor is now on sale by San Diego’s Edico Genome. The processor, which is sold on a standard PCIe computer board, is meant to relieve the bottleneck in analyzing the flood of genomic data.

The Dragen processor is a special-purpose microprocessor adapted to analyzing the human genome, said Pieter van Rooyen, Edico’s chief executive. That enables the accelerator card to outperform general-purpose computer chips, such as those used in servers now used to characterize genomic data.

Gene sequencing technology cuts genetic material into fragments, determines the sequence of each fragment, then reassembles these fragments like an immensely complicated jigsaw puzzle.

Software algorithms and high-powered clusters of computers are now used to do that reassembling, but it takes many hours, van Rooyen said. A human genome has 3 billion base pairs, or DNA letters.

“What we’ve done is take that processing that needs to be done to reassemble that giant jigsaw puzzle, and put it in a chip,” van Rooyen said.

“The chip does secondary processing. It does all the processing to map those reads, figure out where they came from, stack them up, compensate for the errors, and then identify how are you different from the reference (genome). Do you have a mutation in one of your genes that might cause cancer? Or if you have cancer, what type do you have?”

“My team’s use of the Dragen processor has enabled us to analyze our RNA-seq data more than 60 fold faster than a 16-core CPU,” said Gene Yeo, of the Cellular and Molecular Medicine and Institute for Genomic Medicine, University of California San Diego, in an Edico statement.

Yeo said the processor has shortened analysis times from 12 minutes down to 11 seconds per RNA sequence dataset, with the same accuracy standard software.