Glioblastoma is one of the most common brain cancers. It’s also one of the most deadly, in part because the cancer tends to recur after treatment. Sometimes these recurrences occur in areas of the brain far from the original tumor site, and clinicians believe this is because individual glioblastoma cells are particularly skilled at infiltrating and traveling through surrounding tissues.

Now researchers in the laboratories of Ben Barres, MD, PhD, Stephen Quake, PhD, and Melanie Gephart, MD — including graduate student and neurobiologist Steven Sloan and postdoctoral scholar Spyros Darmanis, PhD — have collaborated to study the gene expression patterns of individual cells both in the tumor and in the surrounding tissue. They’ve identified specific characteristics of the infiltrating cells and even pinpointed ways in which a patient’s own immune cells might help the tumor to grow. They published their results today in in Cell Reports.

As Sloan described to me in an email:

Until now, there have been no good ways to actually isolate these cells from fresh tissue, since they’re likely few and far between and scattered throughout the brain in a microscopic way. By performing gene expression profiling on these cells we are able for the first time to ask what genes and pathways are ‘turned on’ in these cells, and these may be key pathways that are required for them to migrate out of the tumor in the first place. 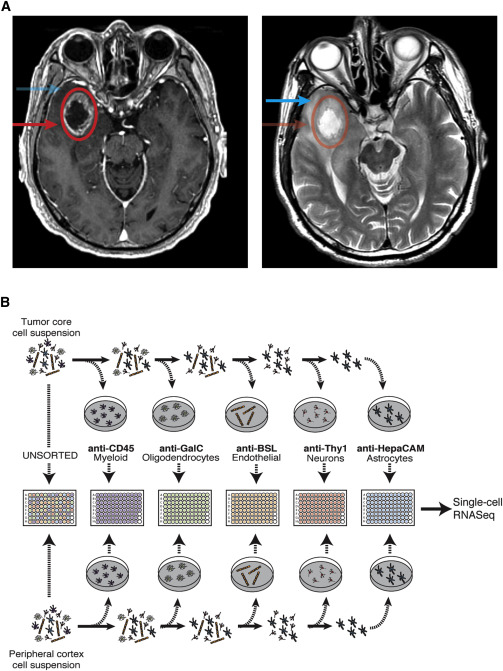 (A) Axial T1 with contrast (left side) and T2 (right side) MRI brain in a patient with a right temporal GBM. The tumor core was defined as contrast enhancing (red circle, arrow), and the peritumor was defined as enhancing yet T2 hyperintense (blue arrow). (B) Overview of the experimental procedure.

Understanding the genes and pathways turned on in the migrating cells may allow us to find new drug targets to prevent tumor migration and possibly recurrence in these patients. Additionally, we found that, although the cells that comprised each patient’s tumor were molecularly very distinct from each other, many of the other cells that reside within the tumor, such as the neurons, glia and immune cells, were remarkably similar across patients.

Although the immune cells, called macrophages, are not themselves cancerous, Sloan and Darmanis found that they aren’t exactly normal either. Macrophages within the tumor expressed genes involved in suppressing inflammation and encouraging new blood vessel growth.

One can imagine that tumor cells are essentially ‘taking advantage of’ the immune system in this context. It’s likely that neopastic cancer cells are able to hijack certain qualities of macrophages by secreting factors that trigger them to enter a pro-growth and anti-inflammatory state. This has additional benefits for the tumor, such as increased nutrient supply.

Because each patient’s tumor cells differ in their gene expression patterns, the researchers envision a potential therapy that instead targets the immune cells within the tumor. Alternatively, examining each patient’s gene expression patterns could identify those people who might benefit more than others from specific therapeutic interventions. The researchers have stored their data at www.gbmseq.org for other researchers to explore and build upon.