By figuring out how a common virus hides from the immune system, scientists have identified a potential vaccine to prevent sometimes deadly respiratory infections in humans.

The research was conducted using the human metapneumovirus (HMPV). The virus was discovered in 2001, but follow-up research has shown that it has circulated in humans for at least 50 years and is considered around the world to be the No. 2 cause of respiratory infections that can be especially dangerous for infants and the elderly.

HMPV is in the same family as respiratory syncytial virus (RSV), the No. 1 cause of human respiratory infections that can also cause serious illness in infants and the elderly – which means these findings may hold promise for development of a vaccine against RSV.

“This is exciting because RSV was discovered in 1953, but we still don’t have a vaccine. The virus inhibits the innate immune response, and can infect the same person again and again,” said Jianrong Li, senior author of the study and a professor of virology in The Ohio State University Department of Veterinary Biosciences and member of Ohio State’s Infectious Diseases Institute.

“Now we have a mutant strain of HMPV that can trigger a higher immune response. Right now we’re working to translate this same concept to see if it can work for RSV, too.”

For this study, published today (Feb. 3, 2020) in Nature Microbiology, researchers determined that HMPV capitalizes on a common modification of its RNA to hide from the innate immune response, which is the body’s first line of defense against any foreign invader. Avoiding that response enables the virus to use host cells to copy itself and cause infection.

By blocking the RNA modification, researchers found in cell studies that the mutated form of the virus they created unexpectedly activated a stronger-than-normal innate immune response. A strong innate response is key to developing an adaptive immune response, the body’s production of antibodies against a specific pathogen.

A test on cotton rats showed the mutant virus effectively functioned as a vaccine against HMPV, preventing infection and triggering both a strong innate immune response and an effective adaptive response.

The RNA modification central to this research is known as N6-methyladenosine modification (a form of epigenetic methylation), presumed to be a survival mechanism that evolved over time. This frequently seen change in RNA was discovered in the 1970s, but its biological function has largely been a mystery since then.

Li’s lab is one of a handful in the United States studying HMPV, and he and colleagues set out to find out whether HMPV RNA even has this modification, known as m6A methylation – which they discovered it does – and then uncover how the modification affects the virus’s behavior.

The team used sophisticated technology, called high-throughput sequencing, to identify the viral gene that contains the most m6A methylation. Researchers then developed a mutated form of the virus by knocking out these modifications so they could assess how the virus functioned without them.

When introduced to human cells, the mutant virus triggered production of a protein called type I interferon, an antiviral molecule, which indicated the innate immune response had been activated – and this protein’s level was higher than it would be under normal immune response conditions.

“This opened up a big question,” Li said. “Why would a virus lacking this methylation produce a much higher innate immune response?”

By tracing the cell signals required to generate the innate immune response, the scientists determined that the RNA modification allowed the virus to hide from the immune system by reducing a host immune protein’s ability to recognize the difference between virus RNA (nonself-RNA) and host RNA (self-RNA).

“We know that when a virus infects cells, it produces RNA, and human cells in the innate response try to separate self-RNA and nonself-RNA,” Li said. “The virus is smart: It gained this methylation, and now our host innate response is confused. That’s how the virus escapes recognition by the innate immune response.”

“We are very excited about this finding. This novel function of m6A may also be conserved in many viruses,” said Mijia Lu, the first author and a postdoctoral researcher in Li’s laboratory. 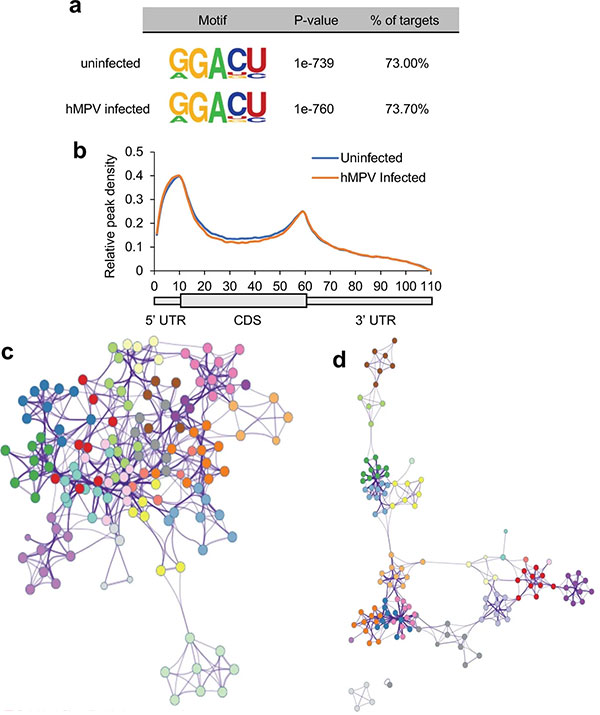 The production of a higher level of type I interferon was an important finding in cells. But to be truly effective, a vaccine must prompt the body to also generate an adaptive immune response, producing antibodies and T-cell immune responses against a specific virus or bacterium. The researchers conducted an experiment with the mutant virus in cotton rats to see if this would happen.

Compared to cotton rats given a placebo, the rats immunized with the mutant virus and then infected with HMPV produced both innate and adaptive immune responses and were completely protected from virus replication in their lungs and nasal cavities.

“In the case of cotton rats, the mutant virus produced a higher amount of type I interferon, and triggered a higher antibody response and a higher T-cell immune response. That means you’ve triggered higher protective ability against the virus infection. So mutating the virus enhances vaccine efficacy,” Li said. “That is exactly what we want.

“We proved a concept that these mutant viruses are improved vaccine candidates for HMPV.”

Li and his collaborators have filed an application to patent the concept of using the mutant virus as a vaccine candidate for RSV and HMPV.