Posted by: RNA-Seq Blog in Publications, Workflow 12 days ago 409 Views

Long noncoding RNAs (lncRNAs) play essential roles in normal physiology and in disease but their mechanisms of action can be challenging to identify. For mechanistic studies, it is often useful to know a lncRNA’s intracellular abundance, i.e., approximately how many molecules of the lncRNA are present in a typical cell of a cell-type of interest. At least two approaches have been used to approximate lncRNA intracellular abundance: single-molecule sensitivity RNA fluorescence in situ hybridization (smFISH) and single-gene, calibrated reverse-transcription followed by quantitative PCR (RT-qPCR). However, like all experimental approaches, these methods have their limitations. smFISH, when analyzed using diffraction-limited microscopy, can underestimate intracellular abundance, especially for lncRNAs that accumulate in focused subcellular regions. Calibrated RT-qPCR may return inaccurate estimates of abundance because individual PCR amplicons spaced across the length of a transcript can vary in their efficiency of reverse transcription.

Researchers from the University of North Carolina at Chapel Hill have developed a sequencing-based approach that is straightforward, orthogonal to smFISH and RT-qPCR, and can be used to approximate the intracellular abundance for most expressed long RNAs (lncRNAs and mRNAs) in a cell type of interest. Firstly, the average weight of total RNA per cell for the cell type of interest is estimated by replicate rounds of RNA purification from a known number of cells. Secondly, an rRNA-depletion RNA-Seq protocol is performed after adding spike-in control RNAs to a known quantity of total cellular RNA. Lastly, by comparing read counts per transcript to a standard curve derived from the spiked-in RNAs, the intracellular abundance for each transcript is estimated. The sequencing-based approach provides a powerful complement to existing methods, particularly in situations where it is desirable to quantify the abundance of multiple lncRNAs and/or mRNAs simultaneously. 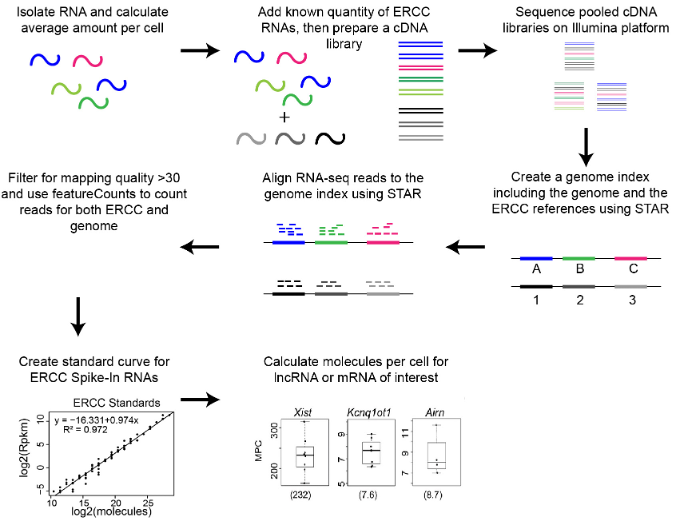