Posted by: RNA-Seq Blog in Expression and Quantification, Other Tools September 29, 2014 3,099 Views

Emerging integrative analysis of genomic and anatomical imaging data which has not been well developed, provides invaluable information for the holistic discovery of the genomic structure of disease and has the potential to open a new avenue for discovering novel disease susceptibility genes which cannot be identified if they are analyzed separately. A key issue to the success of imaging and genomic data analysis is how to reduce their dimensions. Most previous methods for imaging information extraction and RNA-seq data reduction do not explore imaging spatial information and often ignore gene expression variation at genomic positional level.

To overcome these limitations, researchers at UT School of Public Health extend functional principle component analysis from one dimension to two dimension (2DFPCA) for representing imaging data and develop a multiple functional linear model (MFLM) in which functional principal scores of images are taken as multiple quantitative traits and RNA-seq profile across a gene is taken as a function predictor for assessing the association of gene expression with images. The developed method has been applied to image and RNA-seq data of ovarian cancer and KIRC studies. They identified 24 and 84 genes whose expressions were associated with imaging variations in ovarian cancer and KIRC studies, respectively. These results showed that many significantly associated genes with images were not differentially expressed, but revealed their morphological and metabolic functions. The results also demonstrated that the peaks of the estimated regression coefficient function in the MFLM often allowed the discovery of splicing sites and multiple isoform of gene expressions. 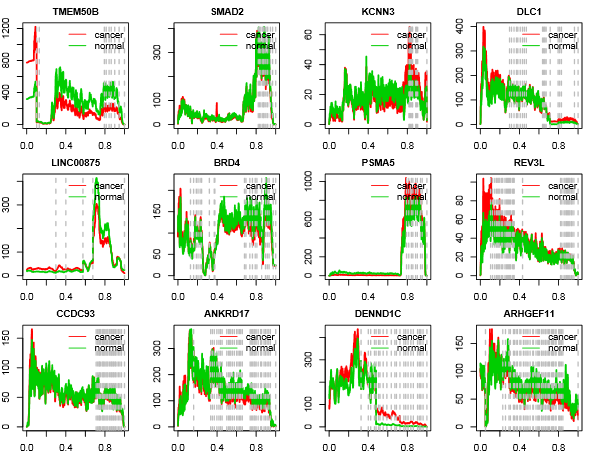