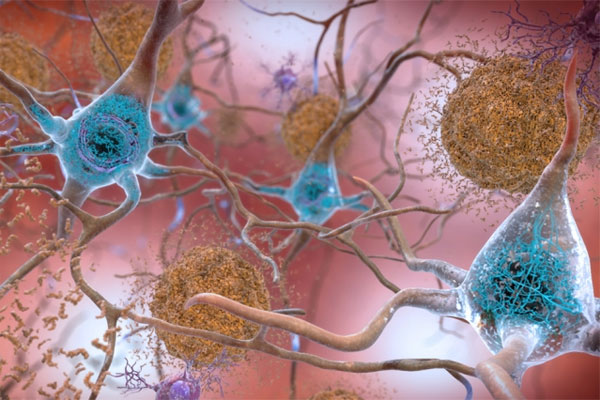 MIT researchers have performed the first comprehensive analysis of the genes that are expressed in individual brain cells of patients with Alzheimer’s disease. The results allowed the team to identify distinctive cellular pathways that are affected in neurons and other types of brain cells.

This analysis could offer many potential new drug targets for Alzheimer’s, which afflicts more than 5 million people in the United States.

“This study provides, in my view, the very first map for going after all of the molecular processes that are altered in Alzheimer’s disease in every single cell type that we can now reliably characterize,” says Manolis Kellis, a professor of computer science and a member of MIT’s Computer Science and Artificial Intelligence Laboratory and of the Broad Institute of MIT and Harvard. “It opens up a completely new era for understanding Alzheimer’s.”

The study revealed that a process called axon myelination is significantly disrupted in patients with Alzheimer’s. The researchers also found that the brain cells of men and women vary significantly in how their genes respond to the disease.

Kellis and Li-Huei Tsai, director of MIT’s Picower Institute for Learning and Memory, are the senior authors of the study, which appears in the May 1 online edition of Nature. MIT postdocs Hansruedi Mathys and Jose Davila-Velderrain are the lead authors of the paper.

The researchers analyzed postmortem brain samples from 24 people who exhibited high levels of Alzheimer’s disease pathology and 24 people of similar age who did not have these signs of disease. All of the subjects were part of the Religious Orders Study, a longitudinal study of aging and Alzheimer’s disease. The researchers also had data on the subjects’ performance on cognitive tests.

The MIT team performed single-cell RNA sequencing on about 80,000 cells from these subjects. Previous studies of gene expression in Alzheimer’s patients have measured overall RNA levels from a section of brain tissue, but these studies don’t distinguish between cell types, which can mask changes that occur in less abundant cell types, Tsai says.

“We wanted to know if we could distinguish whether each cell type has differential gene expression patterns between healthy and diseased brain tissue,” she says. “This is the power of single-cell-level analysis: You have the resolution to really see the differences among all the different cell types in the brain.”

Using the single-cell sequencing approach, the researchers were able to analyze not only the most abundant cell types, which include excitatory and inhibitory neurons, but also rarer, non-neuronal brain cells such as oligodendrocytes, astrocytes, and microglia. The researchers found that each of these cell types showed distinct gene expression differences in Alzheimer’s patients.

Some of the most significant changes occurred in genes related to axon regeneration and myelination. Myelin is a fatty sheath that insulates axons, helping them to transmit electrical signals. The researchers found that in the individuals with Alzheimer’s, genes related to myelination were affected in both neurons and oligodendrocytes, the cells that produce myelin.

Most of these cell-type-specific changes in gene expression occurred early in the development of the disease. In later stages, the researchers found that most cell types had very similar patterns of gene expression change. Specifically, most brain cells turned up genes related to stress response, programmed cell death, and the cellular machinery required to maintain protein integrity.

Bruce Yankner, a professor of genetics and neurology at Harvard Medical School, described the study as “a tour de force of molecular pathology.”

“This is the first comprehensive application of single-cell RNA sequencing technology to Alzheimer’s disease,” says Yankner, who was not involved in the research. “I anticipate this will be a very valuable resource for the field and will advance our understanding of the molecular basis of the disease.”