A team led by researchers at the University of Washington has developed a new statistical method-MutRSeq-for detecting differentially expressed single nucleotide variants (SNVs) based on RNA-seq data. Specifically, we focus on nonsynonymous mutations and employ a hierarchical likelihood approach to jointly model observed mutation events as well as read count measurements from RNA-seq experiments. We then introduce a likelihood ratio-based test statistic, which detects changes not only in overall expression levels, but also in allele-specific expression patterns. In addition, this method can jointly test multiple mutations in one gene/pathway. The simulation studies suggest that the proposed method achieves better power than a few competitors under a range of different settings. In the end, we apply this method to a breast cancer data set and identify genes with nonsynonymous mutations differentially expressed between the triple negative breast cancer tumors and other subtypes of breast cancer tumors.

Distribution of N and 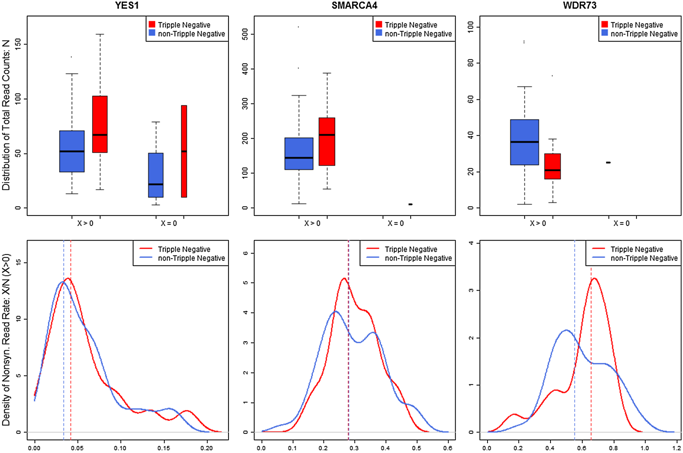 in either the TNBC or non-TNBC group. The width of the box is proportional to the square root of the sample size of each subset. The panels in the second row show the density distributions of

in either the TNBC or non-TNBC group.