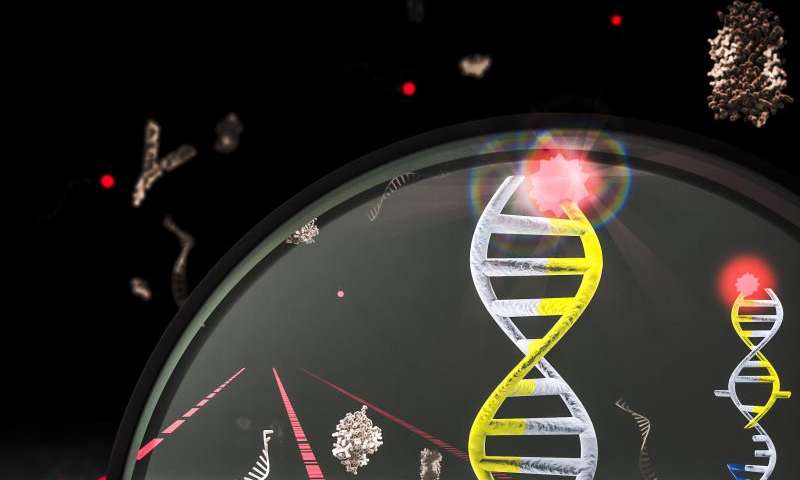 University of Michigan researchers have developed a technique that allows them to efficiently identify snippets of genetic information called microRNAs in blood. The advance could one day lead to a way to scan for multiple types of cancer at once with a simple blood test. In this illustration, the red, blue and black strands represent different microRNAs that, in the new technique, attach and detach to DNA, which is gray in the image. The DNA glows fluorescent when an RNA attaches and the particular pattern of blinking tells the researchers which microRNA has attached. Image credit: MolGraphics

ANN ARBOR—Cancerous tumors cast off tiny telltale genetic molecules known as microRNAs and University of Michigan researchers have come up with an efficient way to detect them in blood.

The researchers say their approach could open the door to a single, inexpensive blood test to simultaneously screen for multiple types of cancer—eventually perhaps more than 100 different kinds.

“This could lead to technology that enables earlier detection in individuals at risk for cancer, earlier detection of recurrences in cancer survivors, and also better and earlier assessment of how well cancer therapies are working in patients,” said Dr. Muneesh Tewari, the Ray and Ruth Anderson-Laurence M. Sprague Memorial research professor of internal medicine at the U-M Medical School and an associate professor of biomedical engineering in the College of Engineering.

It could be years, if not a decade, before this could be available for routine clinical use. But the researchers have high hopes for their ultrasensitive technique that can pick out a single one of these nanoscale snippets in a speck of fluid.

“What we have done is develop a new paradigm, a new principle for detecting any sort of RNA in blood,” said Nils Walter, professor of chemistry and biophysics in the U-M College of Literature, Science, and the Arts.

Walter and Tewari are the senior authors of a study on the work published in Nature Biotechnology.

RNA stands for ribonucleic acid, a class of molecule whose members play important roles in building living things from their DNA blueprints. For decades, scientists thought RNA was mainly a messenger: It ferries genetic information from DNA to the sites where cells make proteins—the workhorse molecules that essentially carry out the directions encoded in our genes.

But when scientists finished sequencing the human genome around 2003, they learned that 90 percent of it contains directions for making RNA. And most of that RNA is not the messenger kind that helps make proteins.

“The field of biochemistry is about 100 years old,” Walter said. “And for the longest time, we were focusing on proteins. It is almost as if we were studying the wrong thing.

“RNA is profoundly important for understanding and manipulating mammalian and human life, yet it is arguably the least studied genetic material in the mammalian cell. We’re just at the beginning of big discoveries of its functions.”

MicroRNA molecules, for example, are short strands that can bind to the messenger RNA, intercepting the dispatch and preventing bits of genetic code from being put into action. More than 1,000 varieties exist in our bodies.

They directly or indirectly control virtually all major life processes, the researchers say. Having too little or too much of a particular microRNA can fuel tumor growth.

Cancerous cells are descendent from haywire healthy ones, so they have microRNA in them too. The tiny strands of genetic material have been detected in blood before (though not very efficiently) and scientists have several hypotheses about how they get there.

They may be released when a cancerous cell dies and breaks down. And cells, including cancerous ones, may communicate with one another through microRNAs they send into the bloodstream to act as hormones. Blood-borne microRNAs from both mechanisms would be the cancer beacons the new technique could efficiently detect in patients, the researchers say.

In their experiments, they coated a glass slide with molecules called “capture probes” that would grab onto microRNAs in their vicinity. Then, in different trials, they dropped onto the slide samples of solutions containing five different microRNAs. In one case, the solution that carried the microRNAs was human blood serum—the fluid component with the blood cells removed.

To tell them RNA had been captured by one of the probes, they relied on a third type of molecule—fluorescent DNA strands that bind to the microRNA and emit light when they do. Only specific DNA sequences will bind to particular RNAs, so by varying the arrangement of the building blocks that make the DNA, the researchers engineered strands that would attach to the different microRNAs. 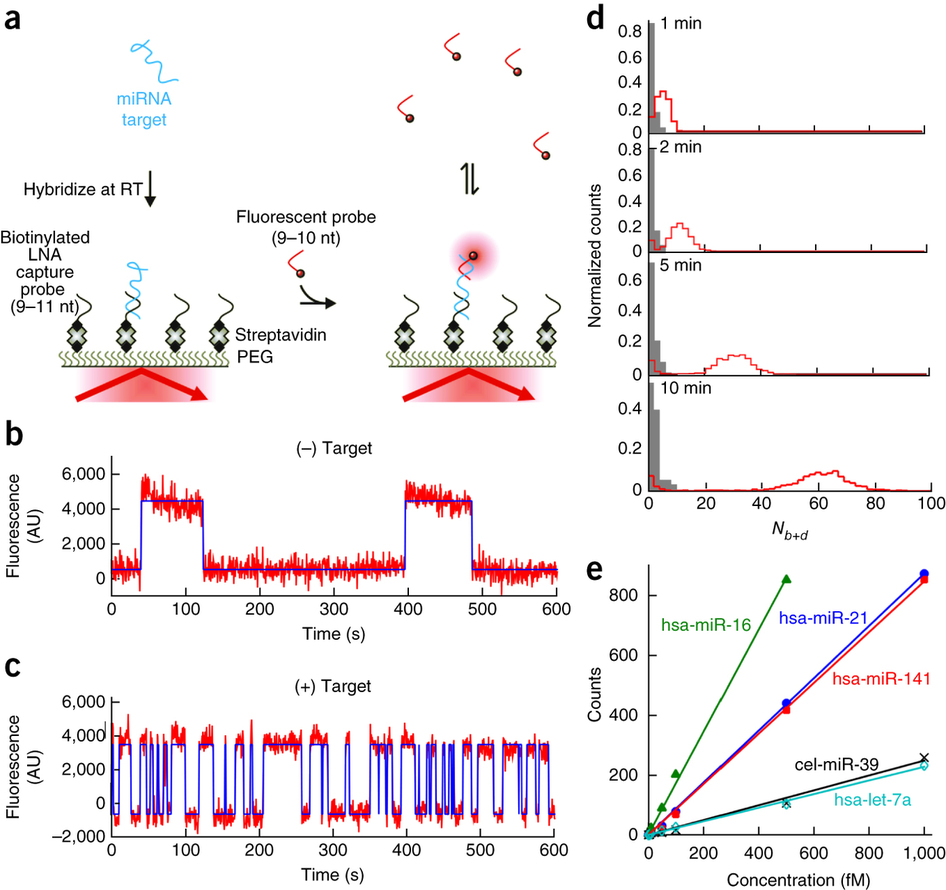 (a) Experimental approach of SiMREPS detection of miRNAs. An immobilized miRNA target is identified by fluorescence microscopy as the site of repeated transient binding by short fluorescent DNA probes. (b,c) Binding of probes to the slide surface (b) exhibits kinetic behavior distinct from that of binding to a target molecule (c) (red, fluorescence intensity; blue, idealization from hidden Markov modeling). (d) Histograms of the number of candidate molecules showing a given number of intensity transitions (Nb+d) in the absence (gray) or presence (red) of 1 pM miR-141 with varying acquisition times. (e) Standard curves from SiMREPS assays of five miRNAs. Linear fits were constrained to a y-intercept of 0, yielding R2 values < 0.99.

What makes their method unique is that the DNA and RNA connect so weakly they don’t stay stuck. DNA strings latch onto and detach from RNA in particular rhythms. When the researchers observe this through a super-sensitive fluorescence microscope, it looks like a firefly blinking.

They can confirm the capture of different microRNAs based on the blink rate—its “kinetic fingerprint.” Although microRNAs have been detected in blood serum before, this approach is more direct and suffers virtually no false positives.

The work was funded in part by the U.S. Department of Defense. U-M is pursuing patent protection for the intellectual property, and is seeking commercialization partners to help bring the technology to market.

Source – The University of Michigan