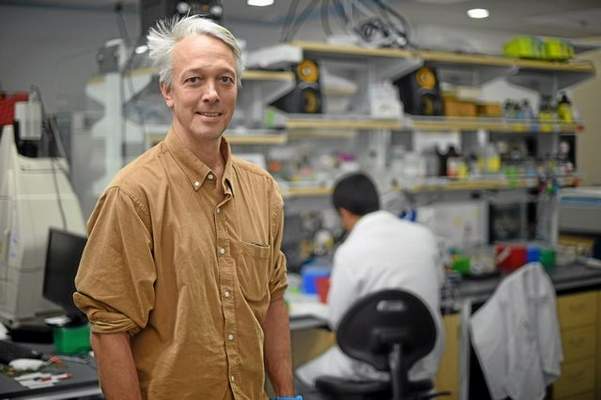 Professor Alexander Hoffmann, who is working to answer biology’s “million-dollar question”: How do genes and the environment interact to ensure health or cause disease? Hans Gutknecht — Staff photographer

LOS ANGELES >> For centuries, biology was limited by the available tools. Biologists had to be able to collect, dissect and illustrate their own samples before they could begin researching.

But as the tools advance, what biologists can do improves along with it.

“Medicine and biology are transitioning to a very data-rich science,” said Alexander Hoffmann, professor of microbioloogy at UCLA and the director of the university’s multidisciplinary Institute for Quantitative and Computational Biosciences, which the school announced in December.

“For past decades, it was really tricky to measure anything in biology,” he said. “Now, we have really good measuring capabilities.”

And the historically math-light science is catching up, with heavy-duty computational horsepower being brought to bear on what he calls the “million-dollar question”: How do genes and the environment interact, causing disease in some people but not impacting the health of others?

Hoffmann and his colleagues are tackling the problem with massive data sets known as “big data,” with information drawn from millions of anonymous medical records, far more than even the most experienced doctor could see in their career.

Microbiology students at UCLA are doing a mix of computational and experimental work, looking at how cells divide and die and trying to separate the actual causes of cell death versus factors that are merely correlated.

“Why are some cells doing this and some cells are not?” Hoffmann asks. “They’re supposedly genetically identical and in the same environment.”

Equally pressing is the investigation into why medications work on some people and yet those same medications don’t seem to help patients with near-identical cases.

So far, the institute has mostly looked at what’s happening in the cells of mice, but Hoffmann hopes that a new grant will allow UCLA scientists to open the door to finding the root causes of illnesses in humans.

The research requires a grasp that only a few years ago even recent biology postdoctoral students didn’t possess. (On his UCLA profile page, Hoffmann refers to his own “rudimentary undergraduate math skills.”)

“As biology becomes a data-rich science, or an information science, you need a different set of skills,” including higher level mathematics and statistics.

“Now it’s about being able to manipulate the data and what (it) can simulate,” he said.

In addition to the doctoral students affiliated with the institute, Hoffmann is working with undergraduates who are looking at careers in medicine and pharmaceuticals. The facility teaches faculty and students how to work with the deluge of findings now available to biologists.

“It is fascinating that biology and medicine cannot move forward without applying computational approaches to huge amounts of data,” Ashley Cass, a third-year Ph.D. student in bioinformatics, wrote in an email. “For example, my work in understanding RNA regulation relies on RNA sequencing technology and coming up with new ways to analyze the data.

“The need for large-scale data analysis is bringing together biologists, statisticians, computer scientists and medical doctors, making it a very exciting time to be involved in science.”