As newer single-cell protocols generate increasingly more cells at reduced sequencing depths, the value of a higher read depth may be overlooked. Using data from three different single-cell RNA-seq protocols that lend themselves to having either higher read depth (Smart-seq) or many cells (MARS-seq and 10X), a team led by researchers from the University of Wisconsin evaluated their ability to recapitulate biological signals in the context of pseudo-spatial reconstruction. Overall, they found gene expression profiles after spatial-reconstruction analysis are highly reproducible between datasets despite being generated by different protocols and using different computational algorithms. While UMI based protocols such as 10X and MARS-seq allow for capturing more cells, Smart-seq’s higher sensitivity and read-depth allows for analysis of lower expressed genes and isoforms. Additionally, the researchers evaluated trade-offs for each protocol by performing subsampling analyses, and found that optimizing the balance between sequencing depth and number of cells within a protocol is important for efficient use of resources. This analysis emphasizes the importance of selecting a protocol based on the biological questions and features of interest.

Illustration of the liver anatomy, and general comparison of the datasets 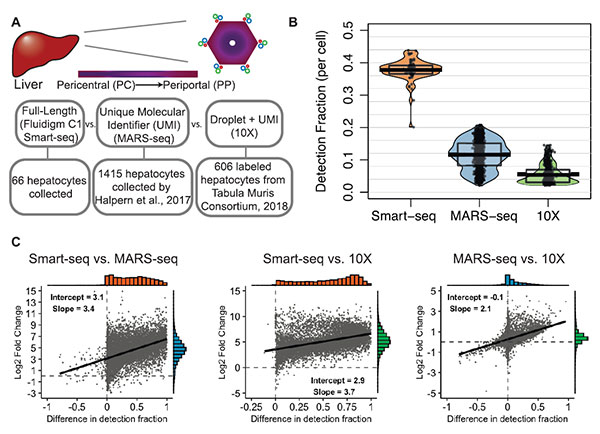 A) Top. Illustration of the liver lobule identifying the portal triad along the outer edges and the central vein in the middle. The color gradient represents metabolic zonation. Bottom. Highlights the main differences between the datasets compared. B) Comparison of gene detection fraction between the datasets. The detection fraction per cell (y-axis) is shown for the two datasets (x-axis). C) Left. The log2 fold-change of genes detected above an average expression level of zero in the Smart-seq dataset compared to the MARS-seq dataset (y-axis), versus the difference in gene-level detection fractions across datasets (x-axis). A linear regression line is overlaid and a histogram of the x- and y-axis are shown opposite of each axis. Middle. Similar plot shown for Smart-seq versus 10X. Right. Similar plot shown for 10X versus MARS-seq.