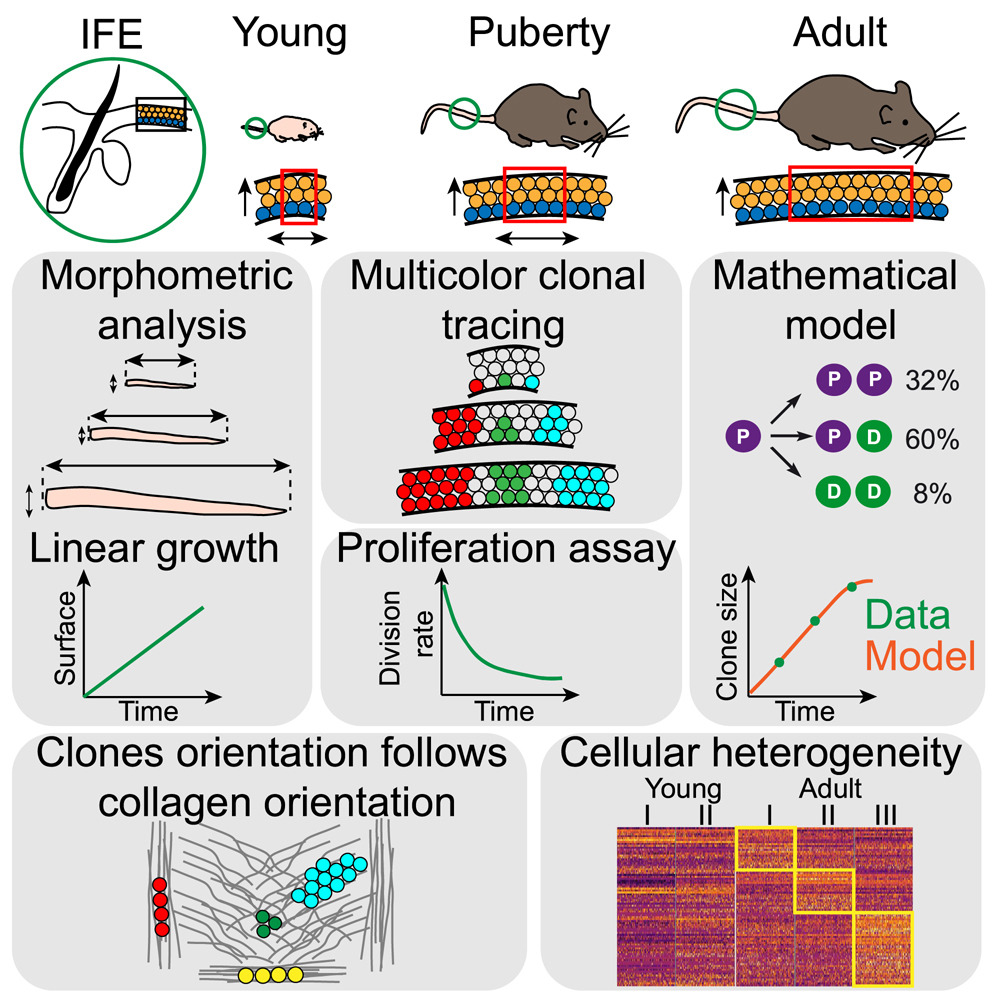 In adult tissue, the number of cells in each tissues and organs remains constant, and any new cells produced by cell division need to be compensated by the loss of other cells. In contrast, during postnatal growth, an excess of cell production over cell loss is required to generate the excess of cells that ensure tissue expansion while maintaining tissue function. Very little is known about the mechanisms that ensure the postnatal growth from birth until adulthood.

In this new study led by Pr Cédric Blanpain, Université libre de Bruxelles-ULB, Director of the laboratory of Stem Cells and Cancer and Welbio investigator, that makes the cover of this issue of Cell, Sophie Dekoninck and colleagues unravel the mechanisms that mediate postnatal skin expansion. This study was performed in collaboration with the University of Cambridge, UK (Pr B. Simons and E. Hannezo) and KU Leuven, Belgium (Pr T. Voet and A. Sifrim). Using multidisciplinary approaches combining lineage tracing, cell proliferation kinetics, single cell transcriptomics, and mathematical modeling, the researchers define the design principles underlying postnatal tissue expansion.

By performing morphometric studies of postnatal skin expansion combined with genetic lineage tracing clonal analysis, they demonstrated that the mouse tail skin expanded by 15-fold from birth to the adult size and they recorded the behaviour of many individual developmental progenitors overtime during postnatal development.

Cell proliferation measurements indicated that cell division progressively decreased over time during postnatal growth. “It was very surprising to see that the tissue growth is achieved through a constant gain of new cells by self-duplication over cell lost and through a gradual decrease in cell division rate throughout the postnatal development” commented Sophie Dekoninck, the first author of the study.

The researchers suggest that this design principle allows optimal tissue growth, meaning that the skin grows robustly and linearly, but also maintains constant the proportion of stem cells and differentiated cells ensuring the integrity of the skin barrier function.

To probe further the molecular mechanisms beyond the observed heterogeneity of the developmental progenitor behavior, the researchers performed single-cell RNA sequencing of skin cells on mice of different ages and analysed developmental progenitors, adult stem cells and their more differentiated progeny. “These data reveal the molecular features of developmental progenitors, which consist of a very homogenous population that actively proliferate and expand whereas the transition from tissue growth to adult life was associated with increased stem cell and progenitor heterogeneity, shaping the final architecture and function of the adult skin. These data pave the way for new fascinating projects in the future” comments Cédric Blanpain, the senior author of the study.

In conclusion, this new study unravels the mechanisms that mediate postnatal tissue expansion, and show that developmental progenitors control the optimality of postnatal growth by maintaining a constant density between progenitor and differentiated cells, which allows harmonious tissue expansion while maintaining tissue function.