St. Jude Children’s Research Hospital investigators have developed a software package to help identify biomarkers that differentiate between cell populations at the single-cell level and gain insights into cancer.

Efforts to capitalize on next-generation sequencing to compare gene expression in individual cells for clues about cancer’s origins, progression or relapse just got a boost. St. Jude Children’s Research Hospital researchers have developed an algorithm that provides a more accurate and sensitive method of identifying differences in gene expression in individual cells.

The algorithm is called negative binomial model with independent dispersions or NBID. St. Jude is providing NBID at no charge to researchers worldwide. Computational biologist and corresponding author Xiang Chen, Ph.D., of St. Jude, and his colleagues developed NBID to take better advantage of single-cell RNA sequencing to track differences in gene expression in individual cells. Their work appeared online recently in the journal Genome Biology.

Single-cell RNA sequencing has emerged in the last decade and gained popularity for the study of cancer and development of the immune system and other organs. By comparing gene expression in different cells, researchers aim to improve our understanding of cancer genetics. Scientists use the technology to find tumor cell subpopulations that are chemotherapy resistant or that represent rare subtypes. The information may also reveal corresponding marker genes, which are defined as genes with different expression levels between populations. Such information would aid efforts to develop precision medicines and more sensitive diagnostic tests.

“We believe NBID will prove useful in identifying biomarkers for other in-depth sequencing data evaluation as well.”

The human genome includes 20,000 to 25,000 genes that carry instructions for making specific proteins that do most of the work in cells. The process requires DNA to be copied by messenger RNA, from which it is translated into a specific protein.

Single-cell RNA sequencing requires researchers to capture messenger RNA within single cells, use the messenger RNA to assemble the complementary strand of DNA, which is then copied (amplified) and analyzed. 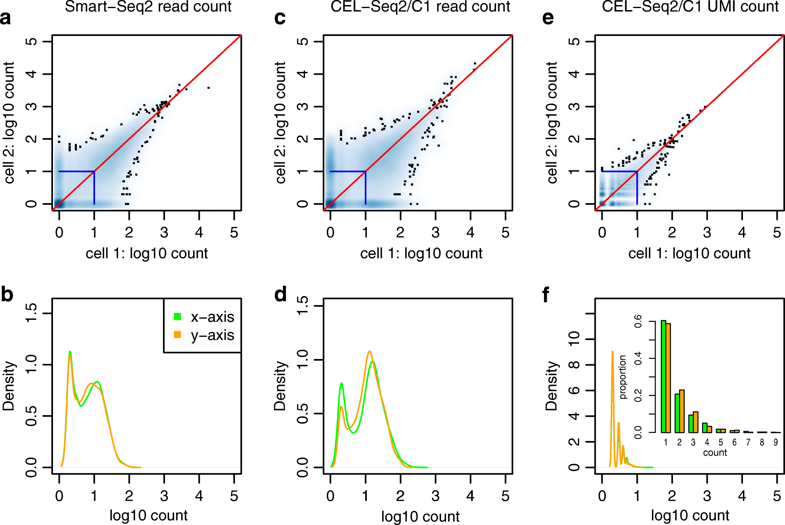 a, b Read counts for Smart−Seq2. c, d Read counts for CEL − Seq2/C1. e, f UMI counts for CEL − Seq2/C1. a, c, e The scatter plot with color-coded density, the highest density at the origin. The left and middle panels, which are based on the read counts, show very different patterns from the right panel, which is based on the UMI counts. b, d, f The density plot along the x- and y-axes of (a), (c), and (e), excluding the origin. For all plots, we kept the genes that were detected in at least five cells among all cells

Gene expression varies widely and fluctuates within cells. Capturing messenger RNA for genes with low- to-moderate expression in individual cells is particularly challenging. Another challenge is data sparsity or low signal and high noise, which requires identifying data of interest, in this case RNA, in a sea of noise. Examples include “drop-out” events in which genes expressed at relatively high levels in a subset of cells are undetectable in other cells.

“The advantages of UMI counts over another method, read counts, in quantification of RNA have been well documented. The statistical difference between these two schemes had been underappreciated,” Chen said. “Upon extensive evaluation of single-cell RNA sequencing data, we revealed that these two approaches should be modelled differently and UMI count could be approximated by the negative binomial model.”