An LMU team has improved both the sensitivity and efficiency of a popular method for single-cell RNA sequencing, which yields a molecular fingerprint for individual cells based on their patterns of gene activity.

The human body is made up of on the order of 13 billion cells – and each of them has a distinct molecular profile. Even cells in the same tissue can differ, often subtly, from one another, and their activities can vary over time. This is why single-cell analyses provide such a powerful tool for the characterization of cellular heterogeneities and the complex mechanisms that account for them. “Single-cell technologies are already revolutionizing biology“, as LMU molecular biologist Professor Wolfgang Enard puts it. Enard and his group have now improved an already highly sensitive method in this field and present their findings in Nature Communications.

Single-cell RNA sequencing makes it possible to obtain a snapshot of the functional state of any given cell – a molecular fingerprint, as it were. Essentially, the technique determines the composition of the messenger RNA (mRNA) population present in a cell. mRNAs are copies (‘transcripts’) of defined segments of the genetic information encoded in the cell‘s DNA, which serve as blueprints for the synthesis by specialized organelles called ribosomes of the specific proteins required in each cell type. Thus the inventory of the mRNAs present in a cell amounts to a list of the proteins made by that cell, which essentially reveals its functional state. By identifying the genes that were active at the time of analysis, it can tell us how these genes are regulated, and what happens when this process is disrupted by infection or other disease states.

The sequencing of all mRNAs from a single cell is a demanding task, and several different procedures have been designed and implemented. All begin with the “reverse transcription” of the isolated mRNAs into DNA by enzymes known as reverse transcriptases. The DNA copies are then replicated (‘amplified’) and subjected to sequence analysis. Enard and his colleagues have now systematically modified one of these methods, SCRB-seq (the acronym stands for ‘single-cell RNA barcoding’), and significantly increased its sensitivity. “The trick is to supplement the reverse transcriptase reaction with an agent that increases the density of the medium. This induces molecular crowding, and speeds up the reaction, so that more RNA molecules are transcribed into DNA strands,” Enard explains. A second modification reduces the incidence of preferential amplification of certain DNAs, which would otherwise distort the representation of the different RNAs present in the original cell. “Together, these modifications make our method, mcSCRB-seq, one of the most effective and economical RNA-seq procedures currently available,” Enard says.

mcSCRB-seq workflow and the effect of molecular crowding 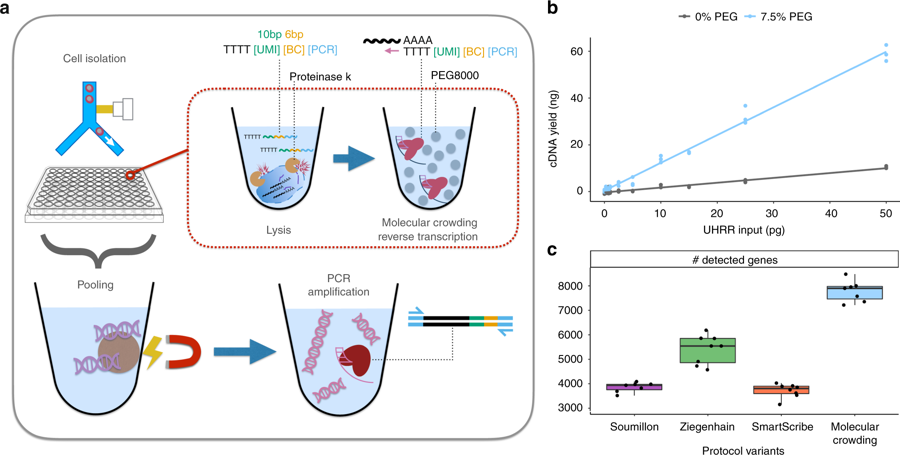 a Overview of the mcSCRB-seq protocol workflow. Single cells are isolated via FACS in multiwell plates containing lysis buffer, barcoded oligo-dT primers, and Proteinase K. Reverse transcription and template switching are carried out in the presence of 7.5% PEG 8000 to induce molecular crowding conditions. After pooling the barcoded cDNA with magnetic SPRI beads, PCR amplification using Terra polymerase is performed. b cDNA yield dependent on the absence (gray) or presence (blue) of 7.5% PEG 8000 during reverse transcription and template switching. Shown are three independent reactions for each input concentration of total standardized RNA (UHRR) and the resulting linear model fit. c Number of genes detected (>=1 exonic read) per replicate in RNA-seq libraries, generated from 10 pg of UHRR using four protocol variants at a sequencing depth of one million raw reads. Each dot represents a replicate (n = 8) and each box represents the median and first and third quartiles per method with the whiskers indicating the most extreme data point, which is no more than 1.5 times the length of the box away from the box

Single-cell RNA sequencing methods are also indispensable for the realization of the Human Cell Atlas. Enard is directly involved in this ambitious international project, which is comparable in scale to the Human Genome Project. Its goal is to assemble a catalog of all human cell types, from embryo to adult, based on their specific patterns of gene activity. The project promises to vastly expand our knowledge of human biology and the origins of human diseases.