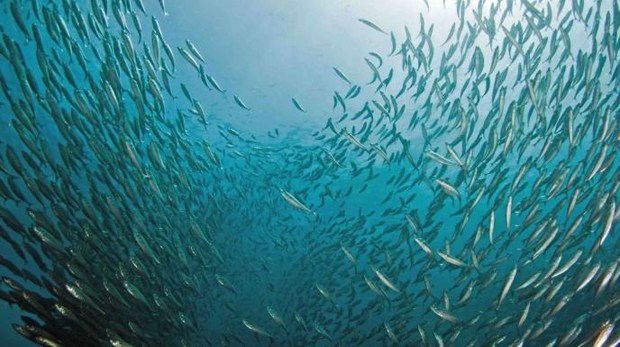 New research published in Nature by scientists at the University of Hawaiʻi at Mānoa School of Ocean and Earth Science and Technology suggests that ingestion of the toxic dinoflagellate Alexandrium fundyense changes the energy balance and reproductive potential of a particular copepod, a small crustacean, in the North Atlantic that is key food source for young fishes, including many commercially important species. Alexandrium fundyense is a photosynthetic plankton—a microscopic organism floating in the ocean, unable to swim against a current.

Though this dinoflagellate is responsible for paralytic shellfish poisoning, previous studies suggested that the copepod is highly tolerant of the dinoflagellate with no increase in mortality. However, with this new research, lead author, Vittoria Roncalli post-doctoral researcher at the UH Pacific Biosciences Research Center (PBRC), and co-authors found the toxic dinoflagellate does indeed stress the copepod, Calanus finmarchicus, and impacts its energy balance. Thus, copepods feeding on the dinoflagellate have less energy available for life processes including growth, reproduction and creating essential fats (lipid biosynthesis).

In controlled laboratory experiments, the researchers fed different groups of copepods low doses or high doses of the toxic dinoflagellate and measured the physiological response using a novel molecular technique, known as RNA-Seq.

“In essence, we were able to identify the instructions that directed the copepod’s response to its changing environment,” said Roncalli. “By analyzing changes in the ‘messenger RNA’ profile we discovered which biological processes were affected.”

To their surprise, they observed large-scale physiological responses in both the high and low dose diets. The copepod’s energy balance was affected, even in the low dose treatment, and the effect on lipid biosynthesis was particularly unexpected.

Impacts up the food chain

Global climate change is affecting all environments on Earth, benefiting some organisms while hurting others. One trend is the increase in the frequency and magnitude of harmful algal blooms, such as blooms of the dinoflagellate Alexandrium fundyense, thus increasing the number and extent of fishery closures due to paralytic shellfish poisoning in the Gulf of Maine.

“Further, high-density harmful algal blooms could, at the population level, affect the number of copepods, thus affecting the food source which sustains important fisheries in the Atlantic,” said Petra Lenz, researcher at PBRC and co-author of the study.

The researchers are currently working on a second study to assess the effect of the dinoflagellates on the early developmental stages of the copepod, C. finmarchicus. Furthermore, using this novel technique, they can now investigate how key zooplankton species respond physiologically to changes in temperature and food, and human influence on the ocean.

Source – University of Hawaiʻi at Mānoa