A Salk Institute study found that the activity of nearly 80% of genes follows a day/night rhythm in many tissue types and brain regions. The study is published in the journal Science.

This comprehensive study connects timing to gene transcription (the process of copying DNA into RNA to guide protein assembly). “This is the first time a reference map of daily gene expression has been established,” says Satchidananda Panda, PhD, a professor in Salk’s Regulatory Biology Laboratory and senior author on the paper, in a release. “It’s a framework to understand how circadian disruption causes diseases of the brain and body, such as depression, Crohn’s disease, IBD, heart disease, or cancer. This will have huge impact on understanding the mechanisms or optimizing cures for at least 150 diseases.”

Using RNA sequencing, the research team tracked gene expression in dozens of different non-human primate tissues every 2 hours for 24 hours. The team found that each tissue contained genes that were expressed at different levels based on the time of day. However, the number of these “rhythmic” genes varied by tissue type, from around 200 in pineal, mesenteric lymph nodes, bone marrow, and other tissues to more than 3,000 in prefrontal cortex, thyroid, gluteal muscle, and others. In addition, genes that were expressed most often tended to show more rhythmicity, or variability by time.

Of the 25,000 genes in the primate genome, nearly 11,000 were expressed in all tissues. Of those (which mostly govern routine cellular functions, such as DNA repair and energy metabolism), 96.6% were particularly rhythmic in at least one tissue, varying drastically by when they were sampled.

In most of the tissues, gene transcription peaked in the early morning and late afternoon and quieted in the evening after dinner, around bedtime. With 81.7% of protein-coding genes experiencing a rhythmic effect, this timing mechanism is far more widespread than previously suspected.

“These findings provide new insights that could influence how scientific research is validated. For example, scientists trying to replicate previous work may pay closer attention to when specific assays were conducted,” says the paper’s co-senior author Howard Cooper, who is a visiting scientist at the Salk Institute. Aside from informing new research methods, this molecular timing mechanism could also impact drug effectiveness. In the future, pharmacists may provide patients more detailed instructions on how often and when to take drugs.

“We show that more than 80 percent of FDA-approved drug targets are rhythmic in at least one tissue,” says Ludovic Mure, a Salk staff scientist and first author on the paper. “In addition to the drug target, many other mechanisms that affect drug efficiency or toxicity, like its absorption, metabolization and excretion, may be modulated by the circadian clock.”

The molecular clock across tissues 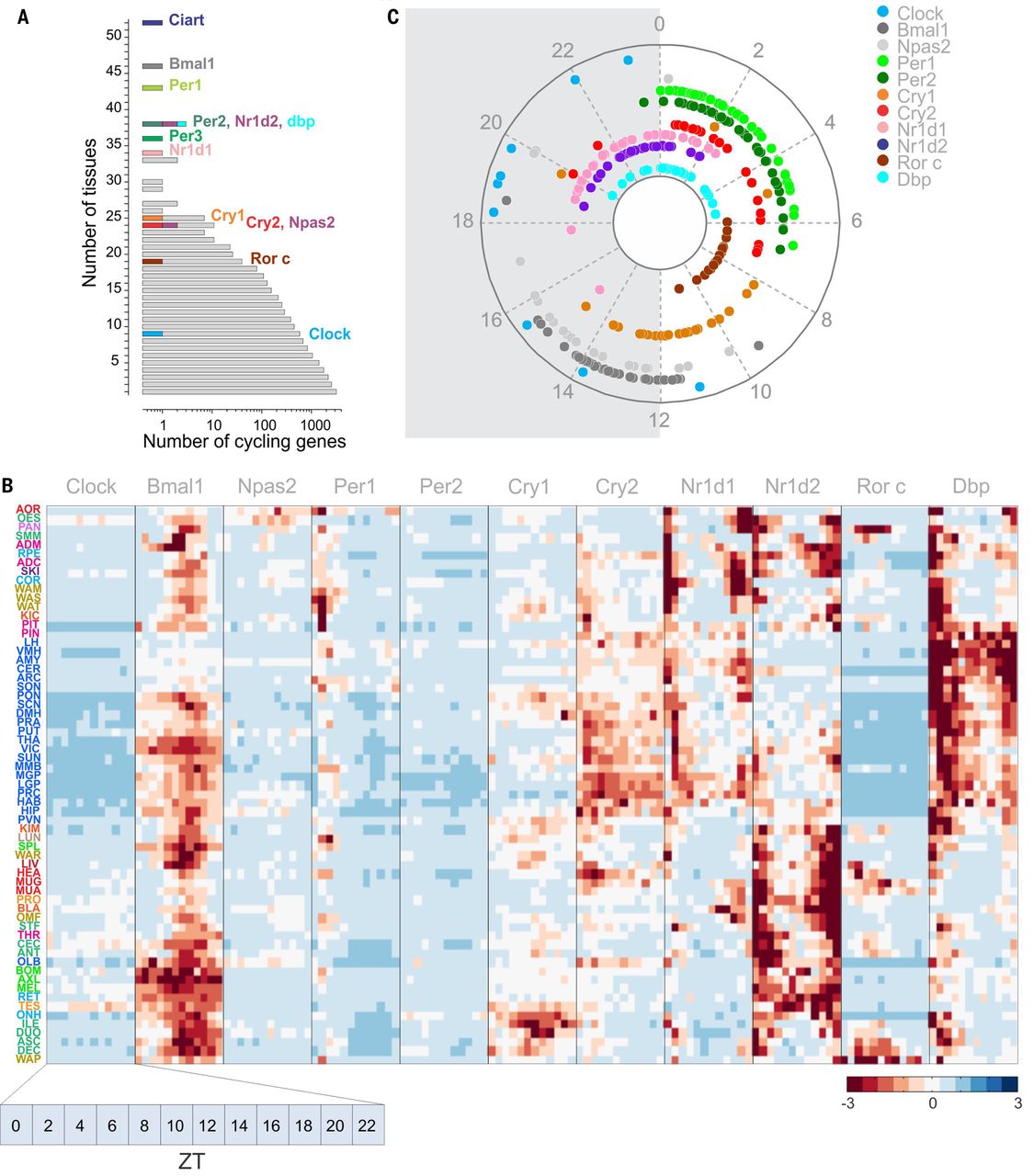 The Salk team’s gene expression atlas could also help scientists illuminate how late-night lifestyles impact human health. This could apply to shift workers or anyone who deviates regularly from the day/night cycle. In addition, this work might also advance aging studies, as these rhythms often become disrupted as people grow older.

“This is a list of how genes are differentially expressed in different organs, and that will give us a framework to understand if shift work and other disruptions change how genes are expressed,” Panda says. “For earlier circadian rhythm research, we did not have a reference, so this is like having a human reference genome.”