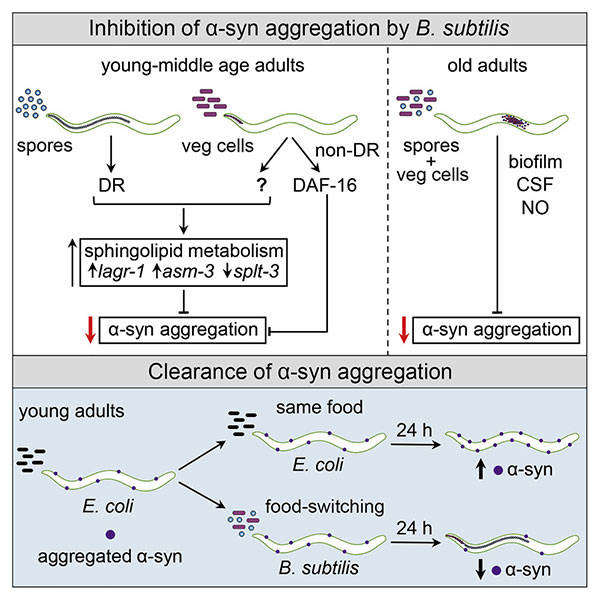 A common bacteria that boosts digestive health can slow – and even reverse – build-up of a protein associated with Parkinson’s, new research suggests.

Building on previous research linking brain function to gut bacteria, this study in a Parkinson’s model of roundworms, identified a probiotic – or so-called good bacteria – which prevents the formation of toxic clumps that starve the brain of dopamine, a key chemical that coordinates movement.

These new findings could pave the way for future studies that gauge how supplements such as probiotics impact the condition.

In the brains of people with Parkinson’s disease, alpha-synuclein protein misfolds and builds up, forming toxic clumps. These clumps are associated with the death of nerve cells responsible for producing dopamine. The loss of these cells causes the motor symptoms associated with Parkinson’s, including freezing, tremors and slowness of movement.

The researchers from the Universities of Edinburgh and Dundee used roundworms altered to produce the human version of alpha-synuclein that forms clumps.

They fed these worms with different types of over-the-counter probiotics to see if bacteria in them could affect the formation of toxic clumps.

Through RNA sequencing, the scientists found that a probiotic called Bacillus subtilis had a remarkable protective effect against the build-up of this protein and also cleared some of the already formed protein clumps. This improved the movement symptoms in the roundworms.

The researchers also found that the bacteria was able to prevent the formation of toxic alpha-synuclein clumps by producing chemicals that change how enzymes in cells process specific fats called sphingolipids.

It is the latest in a number of recent studies which have found a link between brain function and the thousands of different kinds of bacteria living in the digestive system, known as the gut microbiome. Other studies into mice have found that the gut microbiome has an impact on the motor symptoms.

The results provide an opportunity to investigate how changing the bacteria that make up our gut microbiome affects Parkinson’s. The next steps are to confirm these results in mice, followed by fast-tracked clinical trials since the probiotic we tested is already commercially available. Dr Maria Doitsidou – Centre for Discovery Brain Sciences, University of Edinburgh

Changes in the microorganisms in the gut are believed to play a role in the initiation of Parkinson’s in some cases and are linked to certain symptoms, that’s why there is ongoing research into gut health and probiotics. The results from this study are exciting as they show a link between bacteria in the gut and the protein at the heart of Parkinson’s, alpha-synuclein. Studies that identify bacteria that are beneficial in Parkinson’s have the potential to not only improve symptoms but could even protect people from developing the condition in the first place. Dr Beckie Port – Research Manager, Parkinson’s UK

Source – The University of Edinburgh