A novel computer algorithm allows researchers to evaluate drugs’ effects and find new targets using models of cancer cell metabolism. Its developers report that rFASTCORMICS builds these models, which are based on RNA-seq data, in just seconds. The program was developed, tested, and validated by researchers from the Life Sciences Research Unit (LSRU) of the University of Luxembourg and collaborators.

Using rFASTCORMICS, the researchers tested about 800 medications, 40 of which were predicted to inhibit cancer growth. About half of those drugs were already known anti-cancer therapeutics, but 17 were only approved for other indications. The researchers experimentally validated the anti-colorectal cancer potential of three of those 17 drugs – naftifine, ketoconazol, and mimosine. These findings were published in the journal EBioMedicine.

Among other things, “Our tool can help with so-called ‘drug repositioning,’ which means that new therapeutic purposes are found for existing medication. This could significantly reduce the cost and time for drug development,” said Thomas Sauter, Professor of Systems Biology at the University of Luxembourg and the paper’s lead author, in a press release.

Cancer drugs are metabolically optimized to help tumors rapidly proliferate and spread. “Their metabolism is much leaner than that of healthy cells, as they are just focused on growth. However, this makes them more vulnerable to interruptions in the chain of chemical reactions that the cells depend on. Whereas healthy cells can take alternative routes when one metabolic path is disabled, this is more difficult for cancer cells,” explained Sauter.

As a result, many drug developers are looking for compounds that target cancer-specific metabolic pathways.

With this in mind, the LSRU researchers created digital models of healthy and of cancerous cells. Next, they input gene sequencing data from about 10,000 patients in the Cancer Genome Atlas (TCGA) database of the American National Cancer Institute (NCI). Since it was launched in 2006, TCGAhas been populated with data from over 20,000 molecularly characterized primary cancers and matched normal samples spanning 33 cancer types.

Because TCGA data is accessible to researchers, many have used it in their work.  “In our study, we investigated how drugs or combinations of drugs could be used to switch off certain proteins in cancer cells and thereby interrupt the cell’s metabolism,” Sauter said. His group used the models they generated with rFASTCORMICS to simulate the effects of different drugs on cells’ metabolism to identify those that inhibited cancer growth without affecting healthy cells. The models let the researchers filter out drugs that do not work or are toxic, so that only promising ones will be tested in the lab. Using their models, they detected 17 established drugs used for other conditions than cancer that might be able to work against malignancies as well. 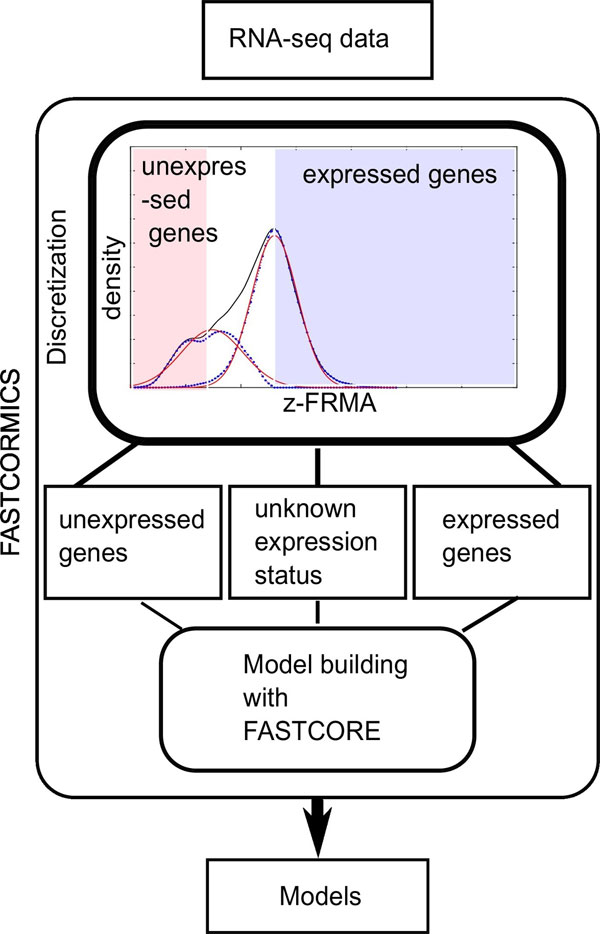 The algorithm has only been tested on colorectal cancer so far, but Sauter said the approach should work with any kind of cancer.

The efficiency of their mathematical method, the researchers say, is what sets it apart. “We managed to create 10,000 patient models within one week, without the use of high-performance computing. This is exceptionally fast,” said Maria Pacheco, a postdoctoral researcher at LSRU and first author of the study.

Sauter and his team are currently considering various commercial applications for their algorithm. Elisabeth Letellier, who collaborated on this study, pointed out that “In the future, this could allow us to build models of individual cancer patients and virtually test drugs in order to find the most efficient combination. This could also bring fresh hope to patients for whom known therapies have proven to be ineffective.” Letellier is principal investigator at the Molecular Disease Mechanisms group at the University of Luxembourg.

Availability -rFASTCORMICS is freely available for non-commercial users at: https://wwwen.uni.lu/research/fstc/life_sciences_research_unit/research_areas/systems_biology/software/rfastcormics.