The COVID-19 outbreak has become a global health risk, and understanding the response of the host to the SARS-CoV-2 virus will help to combat the disease. RNA editing by host deaminases is an innate restriction process to counter virus infection, but it is not yet known whether this process operates against coronaviruses. Here, researchers from the Institute for the Study and Prevention of Cancer, Italy analyze RNA sequences from bronchoalveolar lavage fluids obtained from coronavirus-infected patients. They identify nucleotide changes that may be signatures of RNA editing: adenosine-to-inosine changes from ADAR deaminases and cytosine-to-uracil changes from APOBEC deaminases. Mutational analysis of genomes from different strains of Coronaviridae from human hosts reveals mutational patterns consistent with those observed in the transcriptomic data. However, the reduced ADAR signature in these data raises the possibility that ADARs might be more effective than APOBECs in restricting viral propagation. These results thus suggest that both APOBECs and ADARs are involved in coronavirus genome editing, a process that may shape the fate of both virus and patient. 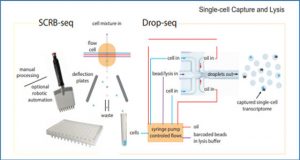