Researchers at Mayo Clinic are closer to answering the question, why does one colon polyp transform to cancer while another seemingly identical polyp does not? A colon polyp is a small clump of cells that forms on the lining of the colon. While most colon polyps are harmless some can develop into colon cancer, which can be fatal if found too late.

“The molecular determinants that distinguish normal, benign polyps from those at risk for becoming cancer are unclear,” says Lisa Boardman, M.D. a gastroenterologist at Mayo Clinic. “In our paper, published in the journal Scientific Reports, we asked the question: why does one polyp transform to cancer while another, that is clinically and histologically identical, does not?”

To answer this question, Dr. Boardman and her colleagues used next-generation sequencing techniques to molecularly characterize and compare colorectal polyps from Mayo Clinic patients that were associated with cancer with those from patients with polys that were benign.

Next-generation sequencing is sophisticated DNA and RNA sequencing technology which allows researchers to study biological systems at a level never before possible.

Dr. Boardman and her colleagues found that polyps adjacent to cancerous tissue exhibited distinct genetic alterations from polyps that remained cancer free. “By integrating multiple sequencing platforms, we identified a panel of 124 genes that were differentially altered between polyps that were associated with cancer and polyps that did not progress to colorectal cancer,” she says. “These results serve as a foundational study showing that polyps with and without cancer exhibit distinct molecular signatures.” 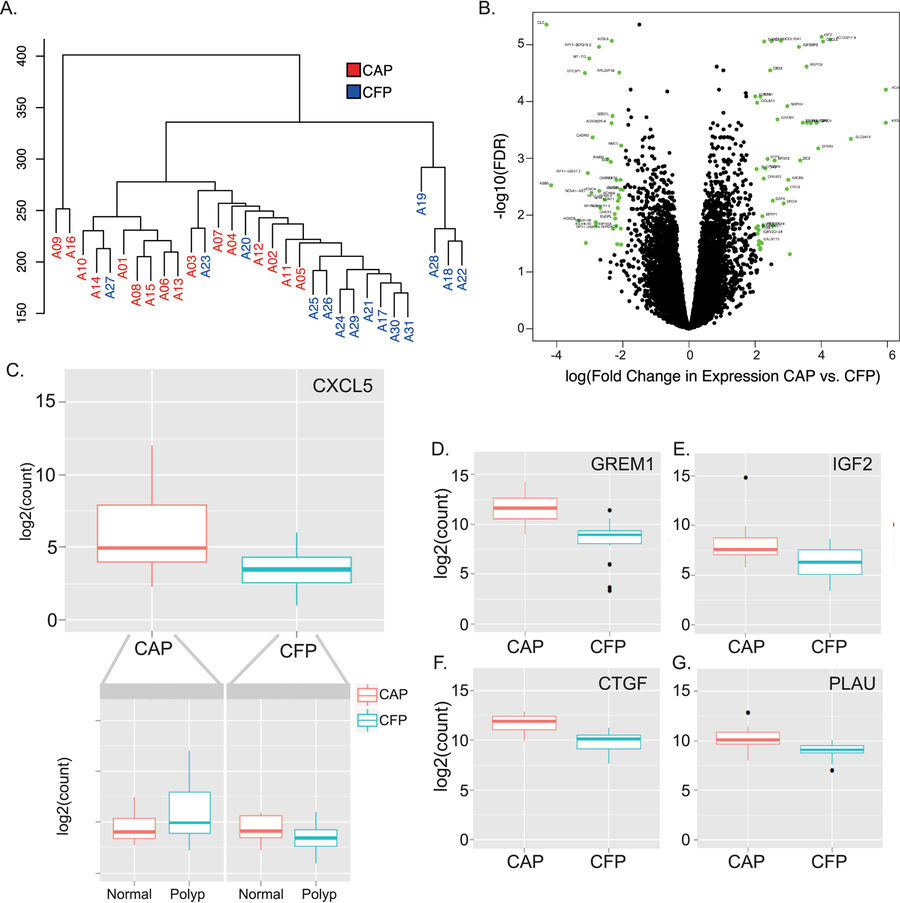 (A) Dendrogram based on average distance of the whole transcriptome between the CAP tissues (red) and CFP tissues (blue). Each patient ID beginning with the letter A is shown. (B) A volcano plot showing all differentially expressed genes between the CAP and CFP tissues. The x-axis is the log of the fold change in expression, and the y-axis is the log of the FDR between CAP and CFP tissues. Green dots are genes that have a fold change > 2, and FDR > 0.1. For a list of genes that are above these thresholds and colored green (C) Boxplot of CXCL5 gene expression for CAPs (peach) and CFPs (teal) polyp tissues. Y-axis is the log2 of the gene counts. The inset shows the boxplots for the normal and polyp tissues from CAP patients (left) and CFP patients (right) for CXCL5, showing the relative change between normal and polyp. Similar boxplots are also shown for (D) GREM1, (E) IGF2, (F) CTGF, and (G) PLAU.

Dr. Boardman says the ability to identify molecular features that predict whether a polyp will transform to cancer would be a major clinical step in individualizing the care of patients with polyps. She says current national guidelines for polyp surveillance are still based only upon polyp size, number, histology and degree of dysplasia. She adds that there are currently no blood or tissue-based molecular tests used to tailor surveillance intervals for patients with polyps.

Dr. Boardman says the ability to determine a polyp’s risk for progression to cancer could have significant benefits for patients and the health care system including reducing costs, reducing risks and improving the use of colonoscopy. “This study is also the first step in our efforts to establish a pre-cancer biobank at Mayo Clinic, which will support future studies on polyps in order to prolong health by preventing pre-malignancy in the colon.”