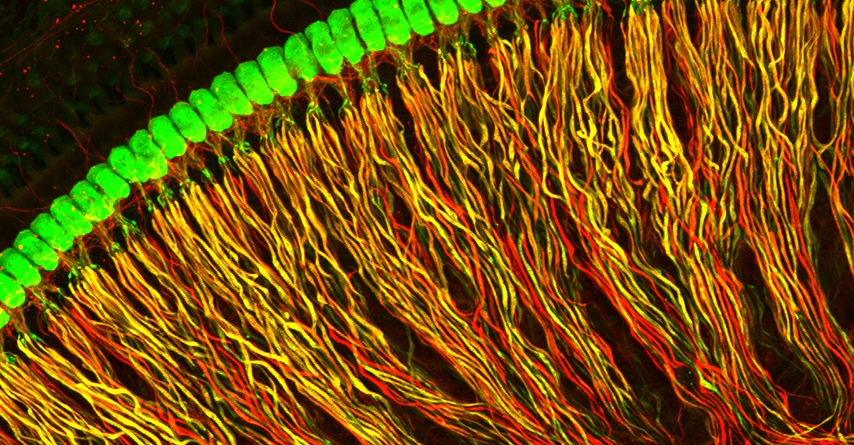 A new study by Harvard Medical School researchers sheds light on the molecular repertoire of neurons responsible for encoding sound in the inner ear, which could inform efforts to develop therapeutic strategies to treat or protect against hearing loss.

Reporting in Cell on Aug. 2, a team led by Lisa Goodrich, professor of neurobiology at HMS, shows that the class of neurons responsible for transmitting information from the inner ear to the brain is composed of three molecularly distinct subtypes.

One of these subtypes is selectively lost in the inner ears of aging mice, and this molecular diversity does not emerge properly in a deaf-mouse model, according to the study.

“Our results enable new lines of research that can help us understand exactly how these neurons differ from each other and how these differences contribute to the sense of hearing, with additional implications for treating age-related and congenital hearing loss,” said Goodrich, who is senior author on the study.

In mammals, the organ of the inner ear responsible for detecting sound, the cochlea, is lined with sensory cells called hair cells, which convert sound vibrations into bioelectrical signals. These signals are processed and relayed to the brain by neurons known as spiral ganglion neurons (SGNs). Damage to either hair cells or SGNs can lead to hearing loss.

SGNs fall into two broad categories. Most of what we think of as hearing is encoded by so-called type I SGNs, which connect inner hair cells to the brain. Previous studies have shown that within type I SGNs, certain subgroups display differences in baseline electrical activity and in responding to sound. One subgroup is thought to be more vulnerable to noise and age-related loss. However, up until now, nothing had been known about how these neurons differ at the molecular level.

Spearheaded by Brikha Shrestha, a research fellow at HMS, the team, using recently developed single-cell RNA sequencing technology, investigated whether discrete molecular identities exist among type I SGN neurons. Collecting SGNs from different regions of the cochlea, the researchers comprehensively catalogued the genes expressed in individual neurons, one neuron at a time.

The team’s analyses showed that type I SGNs are not a uniform population genetically. Instead, they fall into three distinct subtypes, which the researchers dubbed Ia, Ib and Ic. These findings support previously published physiological and anatomical descriptions of different SGN subgroups.

With the discovery of molecular markers, the team examined how SGNs are affected in different forms of hearing loss. When Chester Chia, a graduate student in the Goodrich lab, analyzed aging mice, he found that one of the SGN subtypes, Ic, is selectively lost, consistent with prior physiological studies.

In humans, age is a major contributor to disabling hearing loss, which affects nearly 25 percent of the U.S. population aged 65 and older, and 50 percent of those over the age of 75. One of the hallmarks of such age-related hearing loss is increased difficulty hearing when there is a lot of background noise, such as at cocktail parties.

“They might be able to detect sounds with no problem, but because they lack the least sensitive SGNs, the inner hair cells’ ability to encode signals in a noisy environment is compromised,” Goodrich said.

Additional analyses revealed that some molecular signatures of the three type I SGN subtypes are present at birth and that establishment of subtype identities is critically dependent on electrical activity induced by inner hair cells during the first postnatal week.

In a strain of congenitally deaf mice, these subtypes did not develop properly, suggesting that SGN diversity might be altered by any type of inherited deafness that prevents cochlear function from early in life.

“This may influence the effectiveness of strategies to restore hearing by genetically correcting hair cell deficits or even using cochlear implants—the requisite cohort of SGNs necessary to fully capture the complexities of sound information may not be present,” Goodrich said.

To further characterize the subtypes, the researchers took advantage of the unique anatomy of the snail-shell shaped cochlea. Different areas of the organ detect sounds of different frequencies, with high frequencies processed at the base and low frequencies at the tip. Because frequencies are mapped so reliably in the cochlea, the group was also able compare SGNs from different positions to reveal additional molecular variations both within and across subtypes.

“These findings have implications for the roles these neurons play in encoding different facets of sound and relaying them to higher brain centers,” Goodrich said.

Early research by M. Charles Liberman, the HMS Schuknecht Professor of Otology and Laryngology at Mass. Eye and Ear and a co-author on the new study, was the first to discover physiological differences among the type I SGNs. Some are extremely sensitive to sound and exhibit high levels of electrical activity even in the absence of any sound stimulation, whereas others are much less sensitive and show much lower spontaneous firing rates (SRs).

Since those early studies, type I SGNs have been identified as low, medium or high SR subtypes, each of which has distinct anatomical properties. Previous studies have shown that there are fewer low-SR fibers in aging ears, for example, which is supported by the team’s new findings.

“It’s gratifying to see that the physiological classification has a clear-cut molecular basis and exciting that we can now begin to selectively manipulate each subtype to better understand its role in hearing,” Liberman said.

Goodrich and Shrestha are now investigating how electrical activity stimulates the diversification of these subtypes and whether SGNs retain some ability to change identity over time. The team also hopes to explore SGN molecular diversity in humans, which could aid efforts to restore function in deaf and aging cochleas.

“Recently, there have been great strides in the use of gene therapy to correct defects in inner hair cells. Now we can investigate whether SGN diversity is restored, too,” Goodrich said. “Once we identify the genes that promote the Ic fate, for example, we might be able to devise ways to convert Ia or Ib SGNs into Ic SGNs in noise-damaged, aged or congenitally deaf cochlea and hopefully improve hearing beyond what is possible now.”