As parents of identical twins will tell you, they are never actually identical, even though they have the same genes. This is also true in the plant world. Now, new research by the University of Cambridge is helping to explain why ‘twin’ plants, with identical genes, grown in identical environments continue to display unique characteristics all of their own.

Plant scientists at the Sainsbury Laboratory Cambridge University (SLCU) have built a gene expression atlas that maps the ‘noisy genes’ of genetically identical plants. The research, published today in Molecular Systems Biology, found that around 9% of the genes in otherwise identical plants are highly variable in the way that they behave. Interestingly, many of these highly variable (noisiest) genes help a plant respond to its environment, including genes involved in reacting to light, temperature, pathogens and nutrients.

This variation in gene behaviour could be useful in nature for populations of genetically similar plants to hedge against environmental stress such as drought, high salinity or extreme temperatures. This means that there will always a few plants in the population that are prepared to survive different stresses due to their variable gene behaviours (hedging their bets). But this variability can also be a problem, such as in agriculture where environments are more controlled and farmers want uniform crops that germinate and flower at the same time and respond equally to applications of fertilisers and water.

This is the first time that global levels of noise in gene expression has been measured in plants. The online open-access atlas (AraNoisy) will provide a resource for plant scientists around the world to study how gene expression variability influences plant survival and diversity within clonal populations. This important stepping-stone will help us to better understand how plants survive in fluctuating environments, and could eventually lead to further research in both plant conservation efforts and future crop development.

Looking at the full genetic code (called the genome) of an individual plant or animal is not enough to fully understand the individual’s characteristics. The way genes behave (gene expression) can differ markedly between individuals with the same genome. A gene is expressed when the genetic code of the gene is used to direct a set of reactions that synthesise a protein or other functional molecule within a cell. Copying a segment of DNA to RNA is the first step in this sequence and is called transcription. In this study, ‘noise’ in gene expression refers to the measured level of variation in RNA between individual plants. Measuring the variability in gene expression reveals which genes are noisier than others.

Dr Sandra Cortijo, from the Locke Group at SLCU, is researching how gene expression is regulated and what causes some genes to be expressed in unpredictable ways. To examine this, Cortijo took on the mammoth task of measuring global levels of noise in gene expression in a single plant species. Using genetically identical plants, she measured the expression of all their individual genes over a 24-hour period. 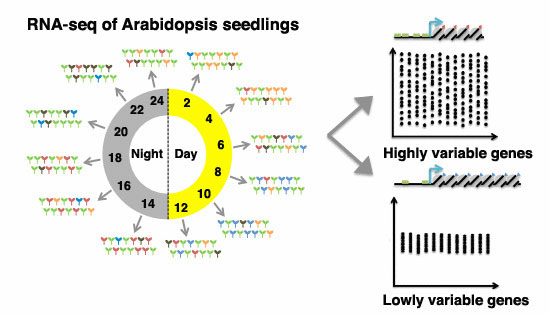 RNA‐seq on individual seedlings is used to detect inter‐individual gene expression variability in Arabidopsis thaliana. 9% of the transcriptome is identified as highly variable for at least one time point during the day/night cycle.

‘For our model plant, we used seedlings of a small wild brassica relative, called thale cress (Arabidopsis thaliana), which is most commonly seen growing as a weed in the cracks of pavements,’ Cortijo said. ‘We performed RNA-sequencing on individual seedlings every two hours over a 24-hour period and analysed the variability for 15,646 individual genes in the plant’s genome.

As part of the study, Cortijo also identified factors that might increase gene expression variability. Highly variable genes tend to be shorter, to be targeted by a higher number of other genes (transcription factors) and to be characterised by a ‘closed’ chromatin environment (which is an environment that allows gene expression to be altered by attaching additional molecules during the gene reading process (transcription) without actually changing a cell’s DNA).

‘These results shed new light on the impact of transcriptional variability in gene expression regulation in plants and can be used as a foundation for further studies into how noisy genes are connected with how plants respond to their environment,’ Cortijo said. ‘Plants are a wonderful system to work with when looking at how genes are regulated in response to environmental changes as they cannot move and thus have to continually sense and respond to environmental changes.

The evolution of variable gene expression could increase the robustness of a plant population against varying environments without changing their genes. Understanding how plants produce and regulate this noise in gene expression will be important for the future development of more uniform performing crops and to understand how populations of wild plants can survive more frequent weather extremes due to climate change.’

SLCU Research Group Leader, Dr James Locke, said the data was a significant new resource for further research: ‘This is an important resource for scientists studying how genetically identical plants survive fluctuating environments and provides a basis for future work looking at how genetic and epigenetic factors regulate variability for individual genes.’