Many genetic factors are thought to contribute to autism spectrum disorder (ASD); however, whether the effects of these factors converge on common functional pathways is not clear. Now, Geschwind and colleagues at UCLA use RNA sequencing (RNA-seq) of human brain samples to characterize differences in the transcriptomes of the cortex and cerebellum between individuals with ASD and typically developing controls, and to investigate the phenotypic relevance of these differences.

The authors carried out RNA-seq on post-mortem samples of frontal cortex, temporal cortex and cerebellum from 48 individuals with idiopathic ASD and 49 control individuals. They found 584 and 558 genes that were differentially upregulated and downregulated, respectively, in cortical samples from people with ASD compared with controls. Notably, cell-type analysis revealed that the upregulated genes were enriched for those expressed by microglia and astrocytes, whereas the downregulated set was enriched for neuron-specific genes. By contrast, differences in gene expression between ASD and control cerebellar samples were much less pronounced, suggesting that the cortex is more vulnerable to genetic perturbations in ASD. To prioritize and organize the data, the researchers conducted weighted co-expression analyses, identifying that changes in 6 of 24 total gene co-expression modules were associated with ASD, with 3 modules (related to development, inflammation and glial function) being upregulated and 3 modules (associated with synaptic and neuronal function) downregulated in the disorder.

Heat map of genes exhibiting DGE between frontal and temporal cortex at FDR < 0.05 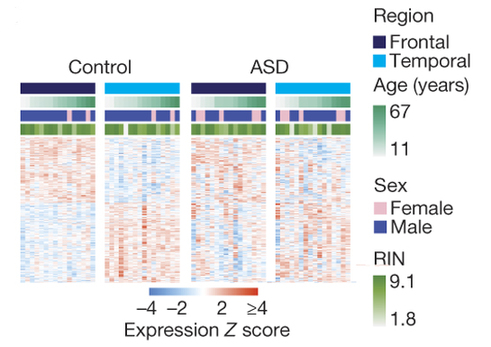 In control cortex and ASD cortex, 551 genes and 51 genes, respectively, show DGE in in frontal versus temporal cortex. The ACP set is defined as the 523 genes that show DGE between regions in control but not ASD samples. RIN, RNA integrity number 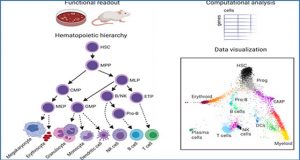 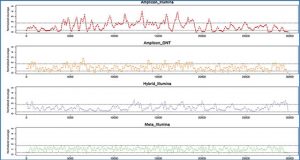