Wood’s complex structure makes it highly resistant to biological or chemical decomposition. The structure includes cellulose, long chains of linked sugar molecules, embedded in a scaffolding of a chemical known as lignin. Brown rot fungi, however, possess a unique ability to attack the cellulose fraction of wood while avoiding the surrounding lignin. This study provides evidence that brown rot fungi accomplish this using a two-step process. The steps are (1) secrete a set of chemicals and enzymes that open up the lignin framework and (2) release a second set of enzymes that break down the cellulose chains into sugars. The sugars are absorbed by the fungi and could be the basis for biofuels.

Understanding the two-step mechanism could lead to new biotechnology approaches. With these approaches, scientists could turn wood cellulose into biofuels or bioproducts—efficiently and cost-effectively. As an added bonus, lignin would remain intact as a potentially useful byproduct.

Wood-decomposing fungi are essential players in breaking down plant biomass in forest ecosystems and could provide important clues on how to more efficiently convert lignocellulose—the primary building block of wood cell walls—to biofuels and other products. Among these organisms, brown rot fungi are unique in their ability to selectively degrade the cellulose in wood while leaving the polyaromatic lignin portion mainly intact.To accomplish this task, these fungi generate highly reactive oxygen species that alter the chemical structure of wood and work in tandem with enzymes that break down cellulose chains. However, reactive oxygen species could just as easily damage the fungal enzymes as the wood structure, so researchers have long hypothesized that the fungi spatially segregate the oxidant generation process from the secreted enzymes using sets of chemical barriers. However, in this study, a team of scientists from the University of Minnesota; the U.S. Forest Products Laboratory; the University of Wisconsin, Madison; Gyeongsangnam-do Agricultural Research and Extension Services, Republic of Korea; and Pacific Northwest National Laboratory found evidence that brown rot fungi separate the oxidants and enzymes in time rather than in space. The team discovered this two-step wood decomposition mechanism by designing a simple, yet elegant experiment: they grew brown rot fungi in one direction along thin wood specimens separating the stages of wood decay linearly across the substrate. The wood was then cut into sections and analyzed for patterns of gene expression using whole-transcriptome shotgun sequencing (RNA-seq), assayed for relevant enzyme activity, and imaged using confocal and fluorescence microscopy.

Gene transcription patterns along the advancing hyphal front
in aspen wafers as measured by RNA-seq. 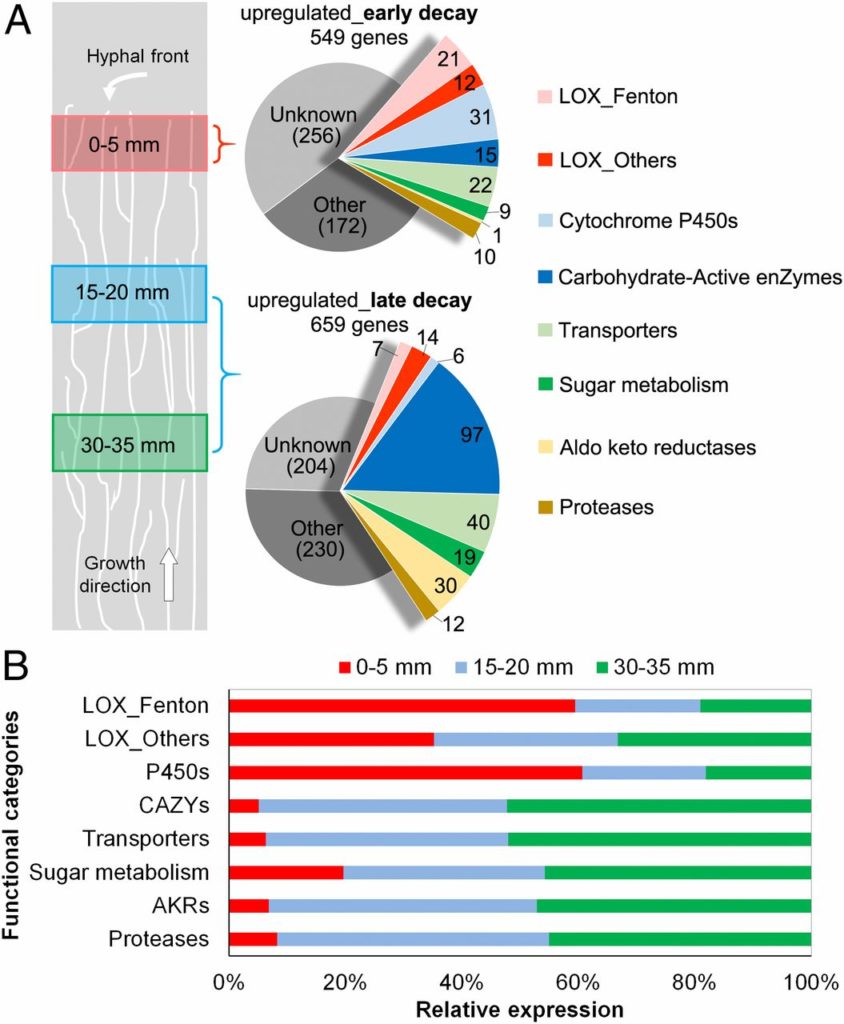 (A) Distribution of DEGs. Relative to sections at 15–20 mm and 30–35 mm, which represent late decay, 549 genes were up-regulated in sections at 0–5 mm, which represent early decay. Conversely, 659 genes were up-regulated during late decay. Data were obtained from three bioreplicates at each position. (B) Relative expression levels in different gene categories. The relative FPKM levels of DEGs in each category were compared among the sections of the three lengths. For DEGs, the fold change was >4 (FDR < 0.05) and the FPKM was >5. The LOX_Fenton category includes enzymes that may support extracellular Fenton chemistry (e.g., via extracellular H2O2 generation, iron reduction and homeostasis, hydroquinone biosynthesis, quinone redox cycling). LOX_Others includes genes that may be involved in lignin/aromatic compound modification, oxalate metabolism, polysaccharide monooxygenation, and protection from reactive oxygen species (9, 57). CAZy genes were assigned according to the CAZy database (www.cazy.org) (58).

The researchers found that at early time points in the brown rot colonization, there was evidence of lignocellulose oxidation by reactive oxygen species and an increase in expression of genes important for plant cell wall swelling. Both of these activities would weaken the structural integrity of wood and make it easier for enzymes to access cellulose chains. Only at later time points of colonization did brown rot fungi begin to produce glycoside hydrolase enzymes that break down cellulose chains into their component sugars. This unique fungal “pretreatment” strategy predates chemical pretreatment approaches used in industrial biomass processing by millions of years and could provide important new clues for improved conversion of woody plant materials into renewable cellulosic biofuels.