Researchers at the University of California, San Diego School of Medicine have identified a new fusion protein found in approximately 15 percent of secondary glioblastomas or brain tumors. The finding offers new insights into the cause of this cancer and provides a therapeutic target for personalized oncologic care. The findings were published this month in the online edition of Genome Research.

Glioblastoma is the most common and deadliest form of brain cancer. The majority of these tumors – known as primary glioblastomas – occur in the elderly without evidence of a less malignant precursor. Secondary glioblastomas occur mostly in younger patients and progress from low-grade, less aggressive precursor tumors to glioblastoma, the most aggressive form of the disease. 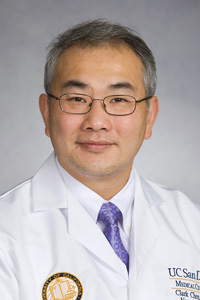 “While genomic profiling is yielding improved understanding of primary glioblastoma, our understanding of secondary glioblastoma remains rudimentary,” said Clark Chen, MD, PhD, vice-chairman of Research and Academic Development, Division of Neurosurgery, UC San Diego School of Medicine and a principle investigator of the study. “In this study, we used a technology called RNA-Seq to study the RNA sequences derived from 272 clinical tumor specimens from patients afflicted with secondary glioblastoma or precursor forms of this tumor.”

The study revealed that the RNA sequences of brain cancers become progressively more abnormal as the tumor become more malignant. Specifically, the frequency of aberrant RNAs fusing gene sequences not normally found next to one another increased with tumor grade. Most of these fusion junctions occur in seemingly random locations. However, transcripts involving fusions of the PTPRZ and MET gene were found repeatedly in clinical specimens derived from different patients. The study estimates that 15 percent of the secondary glioblastoma harbor this fusion.

“The recurrent nature of this fusion transcript suggests that the fusion did not arise by chance. Instead, it’s likely that the fusion actively contributes to the biologic behavior of the tumor,” said Chen, who collaborates with a multidisciplinary team at UC San Diego Moores Cancer Center. “Supporting this hypothesis, we demonstrated that glioblastoma cells expressing the PTPRZ-MET fusion are more invasive and patients afflicted with these tumors showed particularly poor survival relative to other secondary glioblastoma patients.”

“One of the most important implications of the work is that inhibitors against the MET oncoprotein are available for clinical use,” said Bob S. Carter, MD, PhD, study co-author and professor of surgery and chief of Neurosurgery, UC San Diego School of Medicine. “Secondary glioblastomas harboring the PTPRZ-MET fusion may be exquisitely sensitive to these inhibitors. Matching MET inhibitors to genotype of the glioblastoma affords us a unique opportunity to personalize oncologic care.”