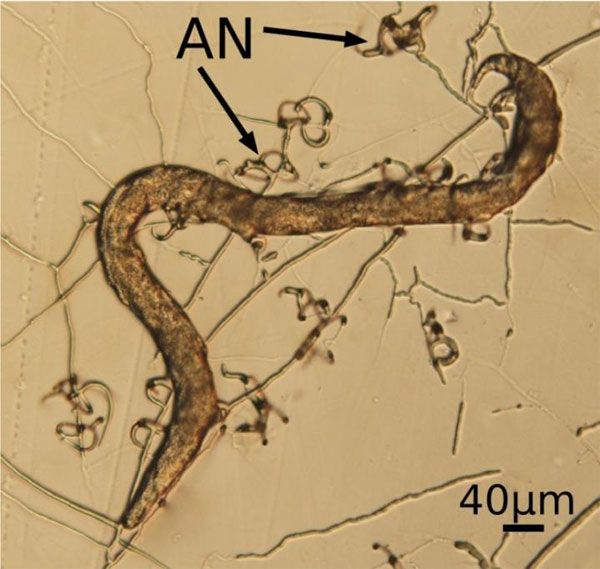 A. oligospora can develop adhesive networks (AN) to capture nematodes.

Fungi are the most common cause of diseases in crops and other plants, and pose major threats to humans and other animals. The successful treatment of fungal diseases is difficult partly because the mechanisms for fungal pathogenesis remain largely unknown as well as that fungi are eukaryotes as the host cells. Multiple lifestyles have been recruited by fungi to live in different environments. The relevance of fungal dimorphism to fungal infections has been demonstrated previously. Most pathogenic fungi are opportunistic and their lifestyle transition from saprophytes to pathogens is a key point for fungal infections. Among them, Arthrobotrys oligospora, a typical nematode-trapping fungus, can be induced by nematodes to develop adhesive networks which is a key indicator of its transition from saprophytes to predators. The adhesive networks are then utilized to capture nematode preys, followed by penetration and digestion (Figure 1). A. oligospora has thus been considered as nature killers of nematodes which cause great losses in crops. Therefore, it is of great importance to understand the underlying mechanisms for lifestyle transition of A. oligospora.

Biologists from the State Key Laboratory for Conservation and Utilization of Bio-Resources in Yunnan of Yunnan University conducted a pioneer study by exploring the potential roles of small RNAs during the trap induction of A. oligospora.

“We started with small RNA sequencing and predicted microRNA-like RNAs using three methods. A total of 863 putative microRNA-like RNAs have been predicted and 7 of them have been confirmed. The target genes of the putative microRNA-like RNAs were predicted using five methods. It is very interesting to find out that the qde-2 gene was in the target list of mil-289.” Said Dr. Xinglai Ji, the senior author for this work. “This is a high risk study for that it is not for sure whether microRNA-like RNAs exist or function in trap induction of A. oligospora. Although miRNAs widely exist in animals and plants, they were rarely reported in fungi. Our study suggests the wide existence of microRNA-like RNAs in nematode-trapping fungi and play important roles in their lifestyle transition, which provides new insights into understanding the adaptation of fungi from scavengers to pathogens.” Said Xinglai.

“This work is a great team work that collaborated by the scientists from different areas. The study was designed with combination of both bioinformatics analysis and experimental confirmation.” said the corresponding author Dr. KeQin Zhang, a scientist working on nematode-trapping fungi for many years. After comprehensive analyses, the potential microRNA-like RNAs with high expression were confirmed by experiments. “High-throughput sequencing technologies provided opportunities to screen for targets on genome scale. And then they were confirmed by following experiments. Moreover, further studies showed they were very important in nematode-trapping fungi and how they worked during the induction pathways. Nematode-trapping fungi can keep nematode population in balance in nature, which makes them good potential bio-control agents. The critical role of microRNA-like RNAs and related pathways is of great interests of developing high efficient agents to help prevention of nematodes in agriculture.” Said KeQin.

“Both RT-PCR and northern blot analysis were carried out for confirmation of the 170 putative microRNA-like RNAs. To explore their functions, the genes encoding the confirmed microRNA-like RNAs were knocked out separately to observe whether the deleted strains can be induced as the wild strains. Besides, the argonaute protein QDE-2 was immunoprecipitated and RIP analysis was performed to verify whether the microRNA-like RNAs and their target genes were associated with QDE-2 and how they worked. Moreover, qde-2 gene was also removed from the genome which led to more serious deficiency in lifestyle transition than deletion of single microRNA-like RNA.” Said Dr. Heng Li, the co-first author. “The interesting part is that the inhibition of qde-2 by mil-289 can be confirmed in transient gene expression system in tobacco, which forms a regulatory loop in the RNAi regulation (Figure 2). Further studies are still needed.”