Decades-long endurance training alters the activity of genes in human skeletal muscle that are important for metabolic health. This is according to a new study published in the journal Cell Reports by researchers at Karolinska Institutet in Sweden and the University of San Diego in the U.S. Sex differences found in untrained individuals were also dramatically reduced with long-term training. The results may have implications for metabolic disease prevention.

Exercise training performed over a lifetime is known to result in numerous health benefits and can prevent diseases such as type 2 diabetes, heart disease and cancer but the mechanisms behind these effects are not completely understood.

“Although short bouts of exercise have been shown to influence the gene activity in our muscles, it is the dedication to habitual exercise over a lifetime that is associated with long-term health benefits,” says lead author Mark Chapman, assistant professor at the Department of Integrated Engineering, University of San Diego and researcher at the Department of Physiology and Pharmacology, Karolinska Institutet. “Thus, understanding how our muscles are changing over many years of training is critical to determining a link between exercise and health.”

Changed activity of more than 1,000 genes

The current study included individuals who had performed intensive exercise training for at least the past 15 years, either long-term endurance training (9 men/9 women) or strength-training (7 men), as well as age-matched untrained healthy controls (7 men/8 women). Skeletal muscle biopsies were collected from all 40 volunteers, and RNA sequencing was performed to measure the activity of over 20,000 genes. 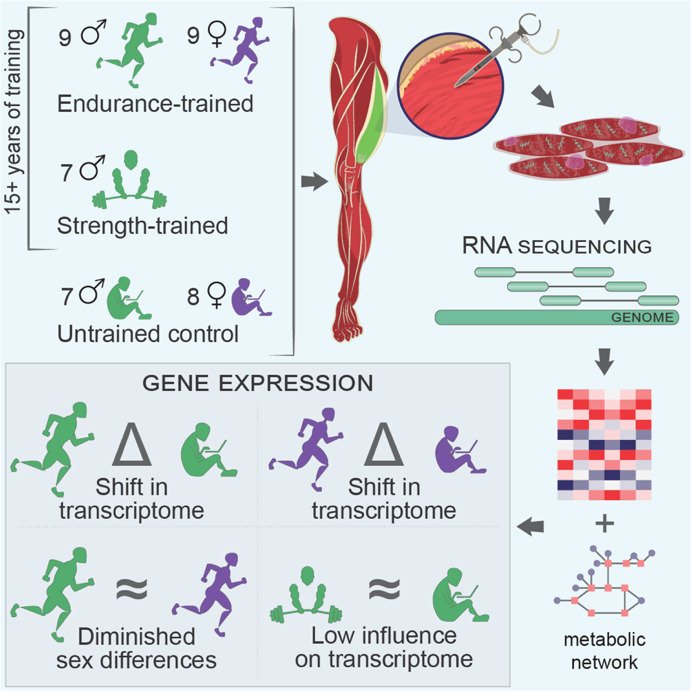 Long-term endurance training (running or cycling) significantly changed the activity of more than 1,000 genes in both women and men compared with controls. Many of the altered genes were related to an increased activity in numerous metabolic pathways related to the prevention of metabolic diseases, such as type 2 diabetes. Surprisingly, only 26 genes were found to be changed with long-term weightlifting, suggesting that strength training does not result in accumulated changes in gene activity. However, the authors note that this does not mean gene activity is unaffected with weightlifting, it could be that changes in muscle gene activity with weightlifting are related to proteins instead of RNA.

More than 450 genes were found to be expressed differently in the muscles of the untrained male volunteers versus their female counterparts. Such sex differences are known to exist, but the new study demonstrates that sex differences decreased by about 70 percent with long-term endurance training.

Short-term training also had some effect

The researchers also cross-referenced their data with studies examining muscle gene expression before and after a months-long training period in individuals with type 2 diabetes. The results show that following short exercise programs, individuals with impaired metabolism shifted their gene activity to become more similar to the long-term endurance-trained groups compared with before they started training.

“This suggests that even short training programs of 6–12 months are enough to positively influence the health of people suffering from metabolic disorders,” says last author Carl Johan Sundberg, professor at the Department of Physiology and Pharmacology, Karolinska Institutet. “The study identifies important ‘exercise-responsive’ genes that may play a role in metabolic diseases.”