from Bioscience Technology by Bevin Fletcher – 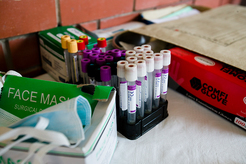 An international team of scientists have developed a blood test, based on biomarkers in gene activity that can reliably predict whether a person with the Mycobacterium tuberculosis bacterium will develop active tuberculosis (TB).

According to the World Health Organization, TB is the top infectious disease killer globally.  In 2014, 9.6 million people became ill with TB and 1.5 million people died from the disease, which is spread from person to person through the air.  About one-third of the world’s population has latent TB, which means they carry the bacteria but have not become ill and cannot transmit the disease.  About 90 percent of people that carry the bacteria will not develop the illness, but 10 percent will develop symptoms.

Up until now, there has been no way to predict wither a person infected by the bacteria will go on to develop active TB.

For the study, published in online March 23 in The Lancet, researchers from the South African Tuberculosis Vaccine Initiative  and the Center for Infectious Disease Research obtained blood samples from more than 10,000 subjects in Gambia and South Africa and analyzed gene activity.  They collected blood samples from study participants every six months and monitored participants for two years.

The findings identified a specific gene profile in immune cells in blood samples of people who eventually develop active TB, using whole blood RNA sequencing data from those who developed active TB compared to those who remained healthy. According to a statement the blood test can predict, with about 75 percent reliability, if active TB will develop. “Such a test could predict the occurrence of the disease more than a year before the disease develops,” lead investigator Willem Hanekom of the University of Cape Town said in a statement.  “This long lead period will give doctors enough time to initiate treatment.”

A parallel study is being led by Stefan H.E. Kaufmann of the Max Planck Institute for Infection biology to develop a pan-African biomarker test for TB by observing groups of subjects from several parts of Africa.  The results will not be published until the end of the year, but findings so far suggest the same specific genes in immune cells are active, indicating an increased risk of developing active TB. “If we can predict early on that an individual will develop active tuberculosis, this will help greatly in containing the disease,” Kaufmann said in a statement.

The blood test described in the recently published study will move to clinical trials to see if progression of the predicted active TB can be stopped with targeted treatment. 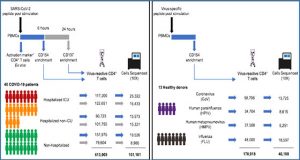