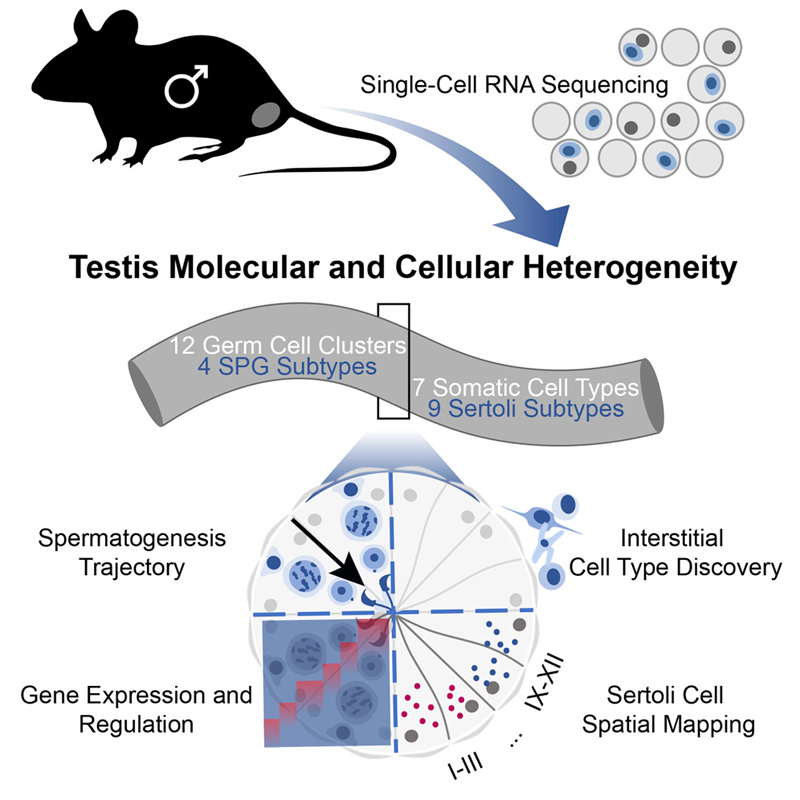 Nearly 1 in 8 couples in the U.S. face infertility, and about half of those cases can be attributed to semen abnormalities in the male partner.

As the root causes often remain a mystery, new research into the basic biology behind sperm development could one day lead to renewed hope for people wanting to grow their families.

“Germ cell development is a very complicated process. A lot is still unknown about how mammalian sperm develop and what is driving the differentiation program,” says Sue Hammoud, Ph.D., lead author of a new study published in Developmental Cell.

Sperm are germ cells that are continuously generated in the male testes, rendering a man fertile throughout his reproductive life span. Sperm development begins with stem cells called spermatogonia. Like most cells in the human body, spermatogonia are diploid, meaning they have two sets of chromosomes, one from each parent.

Unlike other cells, however, the germline stem cell is the only cell in our body that must go through a process called meiosis, a type of cell division that produces daughter cells with only one set of chromosomes from the original parent cell.

At fertilization, a sperm and an egg fuse to start a new, genetically unique individual.

But deeper insight has eluded researchers.

“The spermatogenesis process is difficult to study because we cannot culture all the required cells in the plastic dish,” explains Hammoud, an assistant professor of human genetics, obstetrics and gynecology, and urology at Michigan Medicine.

Much current knowledge of how sperm cells develop comes from examining tissue sections of the testis under a microscope or by analyzing a known population of cells using cell surface markers, which are like ID badges worn by certain types of cells.

Still, the old approaches only analyzed a hodgepodge of commonly found cells, Hammoud notes. Those methods usually missed rarer cell types and key developmental transitions that can help researchers replicate this process in vitro or understand the causes of male infertility.

To overcome this challenge, the new study applied a newly developed, advanced technique called single-cell RNA sequencing to separately analyze more than 30,000 cells from mouse testes, measuring the activity of thousands of genes for each cell.

This led to the most complete catalog to date of all testis cells. The team used this data to characterize the sperm cell developmental program and find new cell types and molecular features.

For example, the atlas reveals for the first time that sperm develop in a continuous program, moving seamlessly from one biological state to the next.

“From stem cell to the mature sperm cell, the developmental program is largely continuous, except for a single discrete transition at the entry into meiosis,” Hammoud says. “To learn this for the first time is quite remarkable.”

Now, researchers can use the knowledge about this program to find the genes that must turn on or off in a precise manner for cells to move through development — a critical step toward finding ways to restore fertility in men who don’t produce enough healthy sperm because of inherited or environmental reasons.

While expanding scientists’ knowledge of the germ cells, this work also provides the research community new information about somatic cell types and states within the testes that support sperm development.

For example, the work captured known cell types such as Leydig cells, which produce testosterone, and Sertoli cells that act like nurse cells that surround the germ cells, protecting them throughout development and conveying signals from the outside environment.

Interestingly, the analysis led to the identification of an unexpected cell population that resembles an embryonic progenitor cell. That has inspired the group’s future work to look more closely at these cell types and their potential in the adult testis.

“Only by understanding germ cell and somatic cell interactions can we begin to drive this process efficiently and safely in a dish,” Hammoud says.