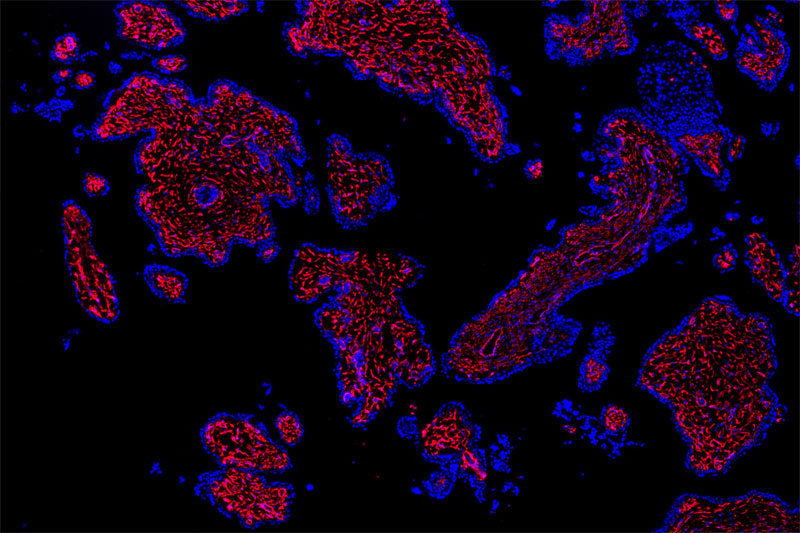 To treat and prevent pregnancy-related disorders, researchers must understand not only what can go wrong, but when. Complications, such as preeclampsia and pre-term birth, often occur in the second or third trimester, and most research to date has focused on those later stages of pregnancy. But the biological events that lead to these problems could start much earlier.

In a new Rockefeller study, published in Science Advances, scientists present the first detailed descriptions of both fetal and maternal cells that are present during the first trimester, a body of work they say could inform further research into a variety of pregnancy complications.

Parent and child, cells and genes

The researchers analyzed cells from placental and decidual, or endometrial, tissues, which allowed them to look at cellular features in the fetus and mother, respectively. In their samples they identified 20 distinct cell types–nine from the placenta and eleven from the decidua.

“It’s the first cellular atlas of the early human placenta,” says Hemant Suryawanshi, first author on the paper and a postdoctoral associate in the lab of Thomas Tuschl.

In addition to identifying different cell types, the scientists used a novel method to determine which genes were expressed by each of those cells. Previous research on first trimester tissue, explains Suryawanshi, relied on a method called bulk RNA sequencing, which generates averaged RNA profile from multiple cells, rather than specific data derived from single cells.

For this study, by contrast, Suryawanshi and colleagues used a microfluidics based single-cell RNA sequencing method to analyze more than 14,000 individual placental cells and nearly 7,000 individual decidual cells, all from first trimester tissue. No previous single-cell RNA study had looked at more than two dozens decidual cells, Suryawanshi says, and those cells were from second and third trimester tissue.

“We now have a profile for the many thousands of genes expressed by each of the 20 cell types,” he says.

The atlas, says Suryawanshi, could become a useful tool for future researchers. For example, a scientist interested in first-trimester endometrial epithelial cells, which are found in the decidua and play a crucial role during embryonic implantation, could use it to see which genes those cells express, as well as the “strength of expression” of each gene, data which the new paper includes.

The need for such a tool is clear, says Zev Williams, chief of Reproductive Endocrinology and Infertility at Columbia University Medical Center, who contributed to the study.  “The placenta is a profoundly important yet poorly understood organ. It is essential for life and, for our time in the uterus, functions as the lungs, kidney, liver and immune system. Yet, its structure and function are still very much a mystery.”

Part of that mystery involves the interaction between the fetus and mother during the first trimester. “Why doesn’t the mother’s immune system, as it normally would, reject the fetus, which in many ways is analogous to an organ transplant or a parasite invasion?” asks Suryawanshi.

The answer may lie in the cellular communication between the placenta and the decidua wall, which sheds off when there is no implantation.

“In the presence of pregnancy, there are dramatic changes in cellular composition and at the molecular level. Now, for the first time, we have high-resolution pictures of those changes,” he says.

And, because the atlas is a blueprint of normal first-trimester tissue and cell types, it could potentially serve as a template to help identify abnormalities at the cellular and genetic level in problem pregnancies.

“We can now begin to understand how the placenta and decidua work in concert to enable healthy pregnancies to occur,” says Williams. “By understanding, in detail, the diversity and specialized functions of cells that comprise the early placenta and the decidua, we can start to discover the underlying causes of many diseases of pregnancy and, ultimately, develop ways to improve pregnancy outcomes.”