Single cell RNA-Seq reveals a new way that cancer can evade immunotherapy — and, maybe, how to stop it

Harnessing the immune system to treat cancer shows great promise in some patients, but for many, the response does not last long-term. In an effort to find out why, Fred Hutchinson Cancer Research Center scientists are using a new technology to look at how cancer cells change under the pressure of immunotherapy treatments.

In a study published Sept. 24 in Nature Communications, researchers used a newly developed method for measuring molecules in single cells to deeply analyze the response to a combination immunotherapy for patients with Merkel cell carcinoma, a rare skin cancer caused by a common virus.

“Twenty percent of Merkel cell patients have an initial response to immunotherapy but then relapse—it’s been unclear why,” said first author, Dr. Kelly Paulson, senior fellow at Fred Hutch. “Understanding the cause of relapse allows us to design immunotherapies that can get toward long-term tumor control to make cancer a more chronic disease.”

Paulson and senior author Dr. Aude Chapuis, assistant member of Fred Hutch, studied cancer cells from two patients who initially responded to the combination therapy, which combined a checkpoint inhibitor to rev up the immune system with a T-cell therapy capable of zeroing in and killing the cancer cells. The T-cell therapy involves removing T cells from patients, multiplying the cells in the lab, and infusing them back into the patient.

At first the cancers shrank from the therapy.

“We saw in both patients that the cancers went almost completely away,” said Paulson, who cares for patients at Fred Hutch’s clinical care partner, Seattle Cancer Care Alliance. “The cancers were shrinking, and when we took biopsies we saw that the T cells actually got into the cancers and helped mediate this regression. That was exciting and the patients were doing great.”

One patient improved from nearly going into hospice to returning to work, but then about two years after his T cells had been infused what looked like a bug bite appeared on his leg.

“It turned out to be metastatic Merkel cell cancer,” Paulson said. “It grew quickly, it was biopsied and shortly after it showed up in multiple places.”

In the second patient, the cancer returned but in an isolated spot. It’s still being controlled and hasn’t spread further.

In both patients, it wasn’t clear why the disease had returned. In collaboration with coauthors Dr. Paul Nghiem of the University of Washington and Fred Hutch’s Dr. Jason Bielas and Dr. Raphael Gottardo, the researchers used a technology called single-cell RNA sequencing to take a close look at molecular changes in T cells, tumor cells and all other cells in the tumor microenvironment to see what had changed.

“By doing this, we were able to see that the tumor was hiding specifically from the T cells,” Paulson said.

The tumor was able to do this by removing one piece of a trio of genes that allow the T cells to find the cancer cells. The gene trio, human leukocyte antigens or HLA, usually all turn off or on at the same time. Traditional methods measure HLA as a group, which made the one gene being turned off undetectable. But single-cell RNA sequencing revealed that just one piece of the HLA trio had been hidden by the tumor; without that one piece, the cancer cells came back invisible to the T cells and the tumors returned. 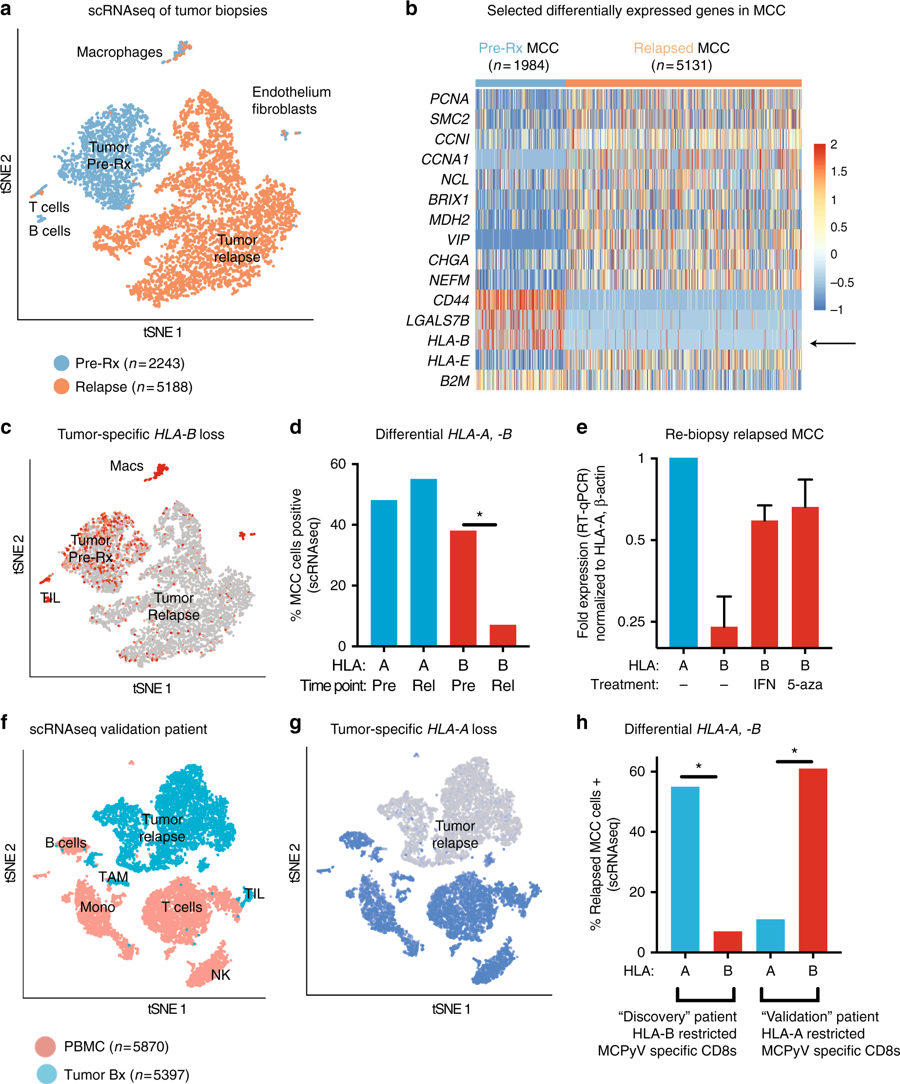 Paulson then wanted to see if the problem could be fixed. She cultured cells from one of the patients and applied drugs already used clinically for other cancers that turned the cancer marker back on.

Ultimately, the results could inform which combination of therapies would be used when people relapse from initial immunotherapy treatment. The researchers are testing those combinations now.

“It’s absolutely revelatory,” Chapuis said of the findings. “We didn’t know what was going on with these patients and how their cancer was able to come back. Now we are able to understand what’s going wrong, and that gives us a way to fix it. It’s very obvious we need a multi-pronged approach rather than just one dagger that the cancer can escape.”