By investigating how genetic variations drive the expression of genes within the filtering cells of the kidney, researchers have found new pathways to explain CKD development and could inform its treatment, according to a study led by Katalin Susztak, MD, Ph.D., a professor of Renal-Electrolyte and Hypertension and Genetics in the Perelman School of Medicine at the University of Pennsylvania. Susztak and team report their findings in Nature Medicine this week.

Earlier this year, Susztak’s lab generated an atlas for the kidney, which included a novel molecular definition of all cell types in the kidney. They concluded that each distinct type has a unique, non-redundant function and that specific dysfunction is associated with specific symptoms in people with CKD. From this, the team started on the path to understand how kidney disease develops at the level of a single cell.

“This study is the first to look at specific cell types and how their genetic variations can lead to disease development,” Susztak said.

CKD, a condition in which the kidneys are unable to clear waste, affects 700 million people globally. The overall prevalence of CKD in America is about 14 percent of the population, according to the National Institute of Diabetes and Digestive and Kidney Diseases.

The team created a database showing how genetic variation influences messenger RNA expression in kidney cells. By integrating information from CKD-related genome-wide association analysis (GWAS) with more specific approaches, researchers identified genes and cells associated with CKD. A GWAS gathers a set of variations in the order of DNA building blocks for certain genes in different individuals to see if any variant is associated with a disease or trait.

“In the past, many GWAS efforts have identified sequence variants for CKD, but the biological basis of these variants was poorly understood,” Susztak said. “We need to do more with all of the information we have sitting in GWAS databases to identify the genes, cells, and molecular pathways responsible for CKD.”

The team found that candidate genes thought to cause CKD—27 in all—were more abundantly expressed in the proximal tubule of the kidney as analyzed by single-cell RNA sequencing. Tubules are part of the fine filters of the kidney where nutrients are reabsorbed from the urine. From this list of 27 genes, they initially focused on one gene, the adaptor protein DAB2 in the TGF-β pathway and found that it was connected to many other genes central to proper kidney function.

Further experiments using two types of CKD mouse models confirmed that reducing DAB2 expression in tubules protected the mice from CKD. By lowering expression of the DAB2 gene, the cytokine TGF-β pathway did not induce fibrosis in a misguided wound healing reaction.

Moving this knowledge toward the clinic requires several more steps, Susztak said: “We are just starting to find which molecules have gone astray to cause disease in order to develop drugs to counteract overactive molecules that cause damage to healthy tissue.” 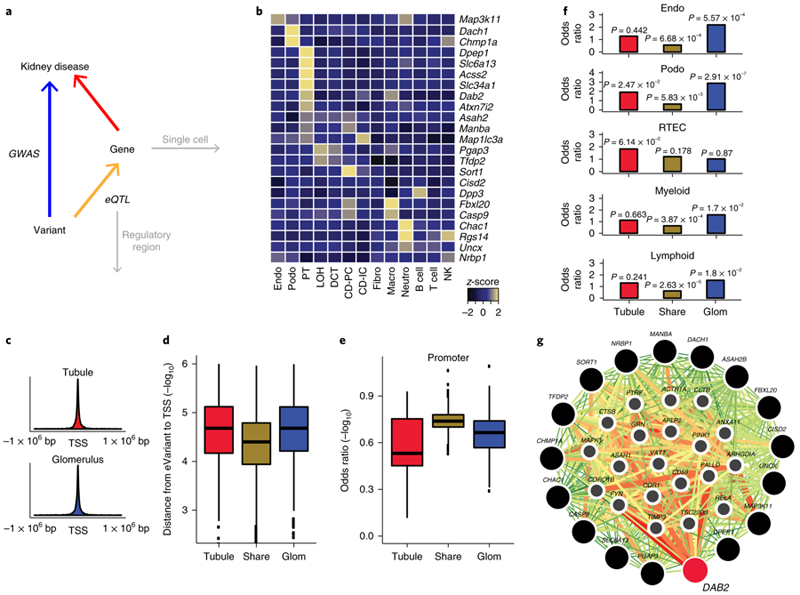