By applying gene analysis to individual cells from early mouse embryos, researchers at Karolinska Institutet in Sweden have discovered previously unknown cellular stages of fetal development from fertilised egg to living being. The study is published in the scientific journal Cell Reports. 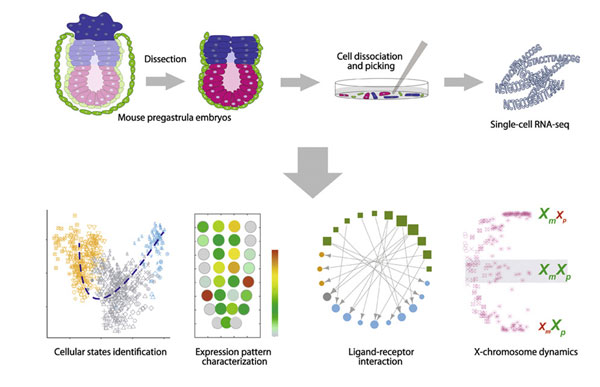 All over the world, researchers are trying to find all the pieces of the puzzle describing how a fertilised egg develops into a healthy being, in order to gain a detailed understanding of the differentiation process from the totipotent stem cell. This knowledge is essential to understanding the mechanisms behind congenital diseases and fetal malformation, and eventually, how to treat diseases using stem cells.

“Being able to follow the differentiation process of every cell is the Holy Grail of developmental biology.” says Qiaolin Deng, researcher at the Department of Physiology and Pharmacology, Karolinska Institutet, and Karolinska University Hospital, Sweden.

Dr Deng has led the study, which has revealed new details of the critical phase between the attachment of the embryo to the uterus and the formation of the first anatomical axis, at which point the embryonic cells begin their journey towards creating a body, with a front and a back.

“It’s a critical period when the whole anatomical plane is created,” she says. “If it doesn’t go smoothly, it can cause fetal malformation or death.”

However, the developmental states of the cells that take part in the process is not always the same. In order to map what happens in individual cells, the researchers used single-cell RNA sequencing on a total of 1,724 cells from 28 mouse embryos in four early stages of development (5.25 to 6.5 days old). An average of 8,577 genes were expressed in each cell.

Using bioinformatic analysis, the cells were then sorted into different cell types on the basis of which genes were active or inactive, allowing the researchers to see the order in which the genes were switched on. The result was a molecular road-map of the events that control cell differentiation.

“The study has revealed previously unknown details about what happens before the early embryo gains its first spatial orientation, and shown that the cells along the future head-tail axis have different differentiation potential,” says Dr Deng.

The new study shows that the first inactivation of the paternal X copy does not happen to the extent previously believed.

“What’s interesting, molecule-wise, is that the paternal X chromosomes that are reactivated never have been completely switched off. The random inactivation also takes place at different rates in the embryo’s cells.”

The results of the study shed new light on the early development of the embryo in animals, humans included.

“Knowledge of the events and factors that govern the development of the early embryo is indispensable for understanding miscarriages and congenital disease,” says Dr Deng. “Around three in every 100 babies are born with fetal malformation caused by faulty cellular differentiation.”